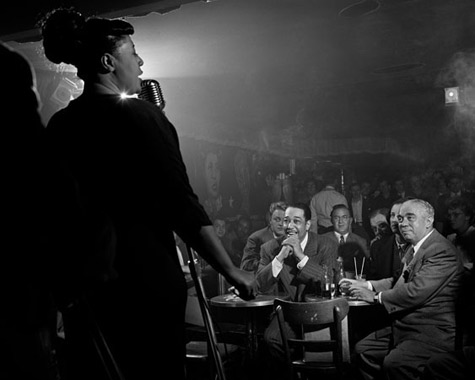 It's always busy in Leonard-Land (despite Herman being 86!). "Legends of Jazz Photography" at Fahey/Klein Gallery in Los Angeles features the work of Herman Leonard, William Claxton and William Gottlieb, April 1 - May 15, 2010 / "Jazz Giants: The Photography of Herman Leonard" is at the Jazz Heritage Center in San Francisco, April 5 - May 16, 2010 / June 1, 2010 sees the release of Heather Pinson's book for the University of Mississippi Press, "The Jazz Image: Seeing Music Through Herman Leonard's Photography" / And the Jazz at Lincoln Center exhibit "In the Best Possible Light: Herman Leonard's Jazz" has been extended until June 19, 2010.

Aside from his historic music photos, Herman also worked in fashion.You can read about his time in Paris in the 50s and 60s in ZOOZOOM.