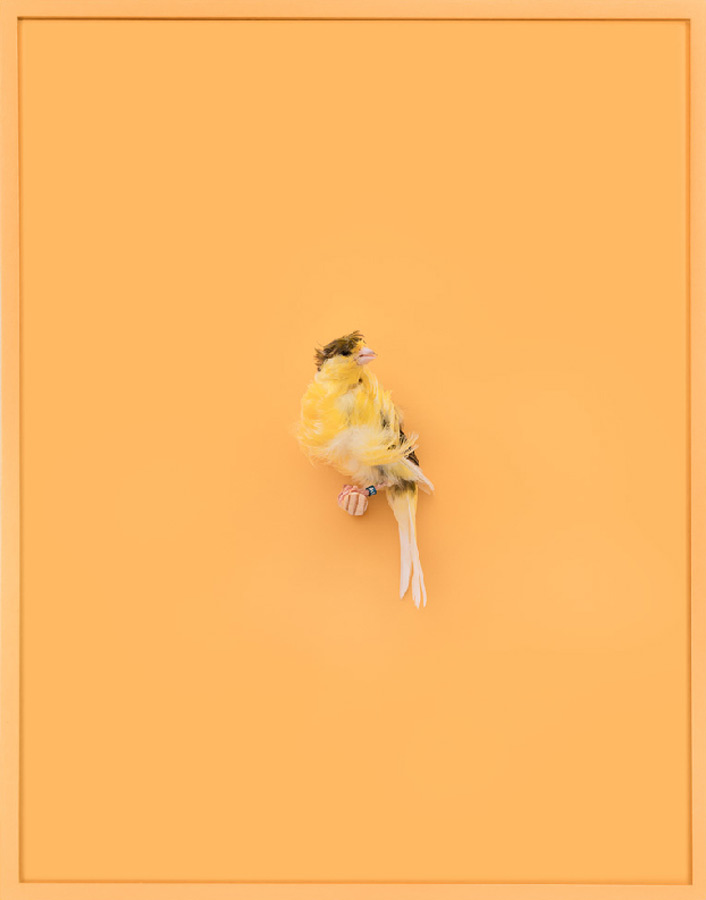 Image: © Daniel Handal, "Yellow Parisian Frilled Canary (Acqua Santa)," 2017; Archival pigment print, painted frame; Courtesy of ClampArt, New York City
ClampArt is pleased to announce "Daniel Handal: Pajaritos" - the artist's first solo show with the gallery. aCurator is thrilled to watch the birdies in full screen in the magazine. I particularly love the way the matching frames elevates these portraits, and how much leg work the artist had to put in finding the correct paint colors. "Pajaritos" is on view now through July 7, 2018 at ClampArt, 247 W 29th St, New York, NY 10001.
Finding exotic bird keepers in New York City, the artist travels to their homes with a portable studio resembling a pup tent with a variety of pastel-colored backdrops that include a place for a perch. He picks an appropriately hued backdrop to situate in the tent along with the bird, and when the excitement settles and his subject rests, Handal shoots the portrait.
Due to their ability to soar far above the earth, birds universally represent the idea of freedom. Handal embraces this symbology and employs the birds in a form of self-identification. The artist was raised in Honduras in Central America where "pajaros" is a derogatory term for gay men. Growing up in a machismo Hispanic culture, Handal struggled with his own sexuality as a youth, worried about his ability to be true to himself amidst the stringent societal pressure to conform. Read more about the series and its underlying message over at ClampArt.
View the full screen magazine photo feature.
Magazine
Share