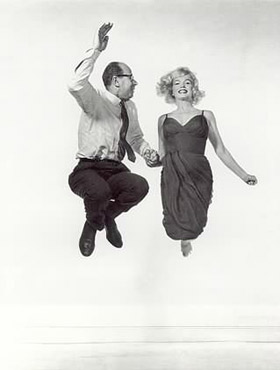 Founder of the scientific art of jumpology, Philippe Halsman's Jump will be on view at Laurence Miller Gallery in NYC from April 1st to May 28th, 2010. His book, Jump, was originally published in 1959 and contained a whopping 178 celebrity jumpers. Irene Halsman, Philippe's daughter, manages his estate, and is a member of the American Photography Archives Group along with me and a whole host of famous photographers and their estates.

In other news, Marilyn Monroe LLC is currently lobbying in Albany, NY, to retroactively change New York state law to allow for a right of privacy after a person dies (see S.6790 Sampson). The NY Times, AP, Getty, Hearst, NBC, CBS and many more oppose the Bill. It's hard to imagine it passing, but if you plan to make any Marilyn Monroe merchandise, do it sooner rather than later.