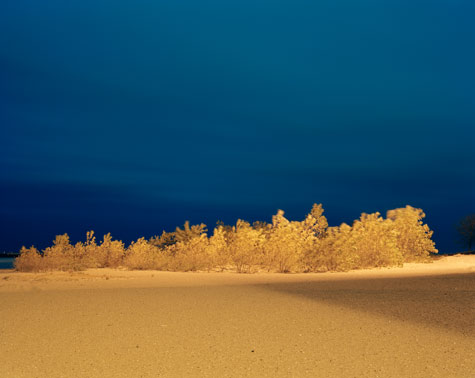 "The sun had set and the sky was a strange electric blue; here was just an empty patch by the shores of Lake Michigan, a small pier, a grove of trees shuddering in the wind under a glaringly bright streetlight, and a nondescript park building. It was November, and as the Chicago wind picked up, it was a challenge to keep my fingers warm enough to work my wooden field camera. I set up the equipment on that cold shore, and made a long exposure, encapsulating the icy nothingness that represented the approximate location where the largest pavilions of the Columbian Exposition of 1893 - the Agriculture Building and the Manufacture & Liberal Arts Building - had once stood.

My current body of work is an examination of how the sites and structures of world's fairs - conceived and built for a temporary, specific purpose - interact in today's unforeseen environment. Some of the most important architects of the 19th and 20th century were commissioned to construct fair pavilions, dazzling, unusual structures incorporating the most cutting-edge materials and engineering prowess possible at the time. Among them are McKim, Mead, and White, Louis Sullivan, Gustave Eiffel, Le Corbusier, Ando, Mies Van der Rohe, and the landscaping of Frederick Law Olmstead.

Tragically, these extraordinary structures are often immediately demolished, reappropriated for far less grand ambitions, or simply neglected. There is a seeming arbitrariness to what survives. In Philadelphia, two of the four remnants from 1876 are fair toilet buildings. In Paris, there are national icons such as the Eiffel Tower, the Grand Palais, and the Palais de Tokyo. In Flushing Meadows Park of New York, Philip Johnson's New York State Pavilion of 1964 sits in sad decrepitude, its stocky concrete support columns chipped and covered in ivy. I became entranced with the fantastical buildings overgrown with weeds, often neglected and ill-fitting among the sleek, modern high-rises looming around them. I use time of year and day - as well as a lush or stark color palette - to further convey the atmosphere of these sometimes-ghostly sites." Read the rest of Jade's statement.