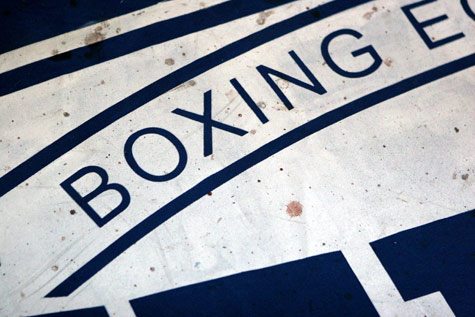 View the feature.
Birthplace of Mike Tyson, Riddick Bowe, Zab Judah and other established fighters, Brownsville, Brooklyn has been home to boxing since the 30's, when it was the local Jews doing the brawling.
Throughout her career, Janette Beckman has been in what many of us might find to be challenging situations. She photographed the mods and rockers, the punks, the rappers; riotous gigs, Ice T and Slick Rick with guns, Boo-Yaa T.R.I.B.E. and Wu Tang Clan, to reference a few more unnerving subjects. Here is her account of her night at Girls' Fight Club shooting stills while a camera crew filmed a documentary.
"One cold December night I went to Brownsville, Brooklyn (considered the murder capital of New York) to take some photographs with a film crew who were making a documentary about an underground illegal female fight club. We arrived at the secret location, a dark deserted street under the elevated train track where a hundred or so young men and women from the adjacent housing projects had gathered inside a windowless garage surrounded by barbed wire. Two locals acting as security frisked everybody for weapons. As soon as the last person had entered, the bouncers bolted the metal door shut. No one is allowed to leave until the event is done.
Inside the building is a boxing ring stained with dried blood from previous fights. Standing in the ring, two young women dressed in street clothes and wearing martial arts training gloves were punching the frigid air. The noise inside the garage is unbelievably loud, people shouting, making bets, greeting friends, and when the fight begins the crowd goes crazy.
I'll admit to being intimidated by the scene - being locked into a building in the middle of one of New York's most dangerous 'hoods with a bunch of hard looking characters drinking, smoking weed, giving gang signs; tough looking girls in hoodies checking me out, pit bulls tied up in the corner. I had no choice but to pick up the camera and shoot.
In the coming weeks I followed the film crew to shoot the girls at home, a kid's birthday party, met families and friends - grandmothers, mothers, fathers, sons - it was the most amazing project I worked on all year." - Janette Beckman
The documentary 'Brooklyn Girls' debuted on the BET channel.
Fight Club © Janette Beckman
Magazine
Share