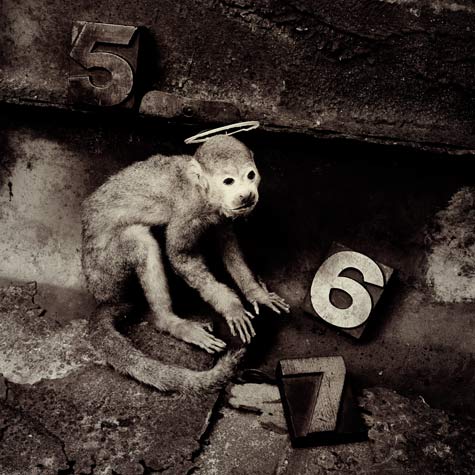 Snap Galleries, specialists in rare and exclusive music photography, are hosting a
retrospective exhibition for acclaimed photographer Simon Larbalestier in April 2010. The exhibition brings together, for the first time anywhere in the world, two distinct yet complementary bodies of work by Larbalestier: historic studio based photographs that appeared on Pixies record sleeves from the 1980s and 90's, and new images created in South East Asia in 2008/9 specifically for the Pixies' box set project, Minotaur.

"Decay, isolation and the visual impression of time ravaged objects were key elements in Larbalestier's work, and photographs from this early period were created using what Larbalestier describes as his 'scientific approach'. This was characterized by elaborately staged sets, where images were shot mainly on black and white film on large static cameras, and then sepia toned later in the darkroom to add feeling and atmosphere. Early work such as Come on Pilgrim and Surfer Rosa were shot on Polaroid type 55 film, which yields both a positive print and a negative image that can be used in an enlarger. The distinctive patterned borders of type 55 film served to heighten the sense of decay and otherworldliness." - Guy White, Director, Snap.

The entire exhibition, with supporting commentary from Simon, is also being released as an iPhone and iPad app.