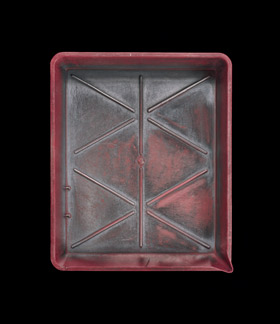 John Cyr is a photographer and a master printer - he owns and runs Silver 68, a traditional black and white lab in Brooklyn. He is a faculty member at ICP and is in his final semester pursuing an MFA from the Photography, Video and Related Media Department from the School of Visual Arts.

John is contacting photographers, their studios, estates, assistants, to determine whether any developer trays remain in their collections. Unfortunately, a lot have been discarded over the years, but as you can see in his ongoing project John has successfully photographed several. Enjoy letting your imagination run wild as to which of your favorites might have been printed in these.

The digital advances in photography over the past ten years have been remarkable. Digital manipulation is found in most contemporary work, even within these developer tray photographs. This shift from film-based to digital imaging is occurring at a rapid rate, which is why photographing developer trays is a timely endeavor. Many photographers, printmakers, and photographers' archivists have already discarded or thrown out their developer trays because they believed they were no longer significant or useful. Irving Penn's developer trays have been thrown away, as have those of master printer Richard Benson. I am photographing available developer trays so that the photography community will remember specific, tangible printing tools that have been a seminal part of the photographic experience for the past hundred years.  By titling each tray with its owner's name, I reference the historical significance of these objects in a minimal manner that evokes thought and introspection about what images have passed through each individual tray." - John Cyr