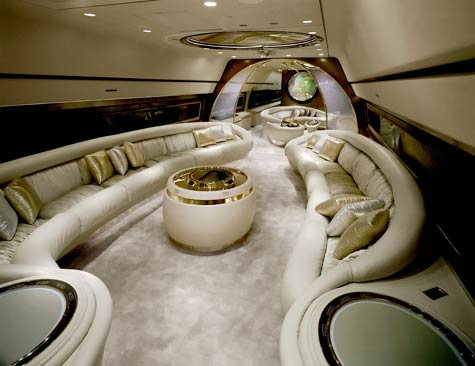 Nick Gleis is clearly a prolific photographer of craft. He has provided photographic images for heads of state and royalty worldwide including Japan, South Korea, UAE, Turkmenistan, Dubai, Cameroon, Mexico, and China - his expertise lies in photographing the most exclusive private jet aircraft. With Martin Parr having selected Nick's work for exhibit at the upcoming Brighton Photo Festival in England, and with his photographs being published around the world, Nick agreed to publish these images full screen in aCurator. With understandable sensitivity to the privacy of the clients, we know little about who and where; we can only gasp at the sheer opulence and let our imaginations run wild within the frame.
Nick sent in a statement: "In the last decade the field of photography has seen a complete revamp in the way we do things. When I was studying photography with Ansel Adams and other noted photographers there was an important phrase which I believe was first stated by Minor White. 'When combined with The Zone System, pre-visualization makes the photographer's vision a reality.' Ansel had developed a method of exposure, development and printing that produced what the photographer intended to be seen. It wasn't necessarily a literal version of what was there. Pre-visualization is the photographer's vision of the final image.
This pre-visualization is the single most important step to achieving a great image in today's world. Pre-visualizing the final outcome - then assembling the necessary elements - is the way to create lasting images, whether one is photographing an aircraft or a sports car. Virtually all photographs taken by me involve pre-visualization. Far too many photographers today rely on digital tricks and software to produce technically good images, but images that neither excite nor inform the viewer. I would advise all up and coming photographers to slow down and look at the scene very carefully. Is there a better angle? Is the lighting optimal? After all, lighting is everything." - Nick Gleis, September 2010
View the magazine full screen photo feature.