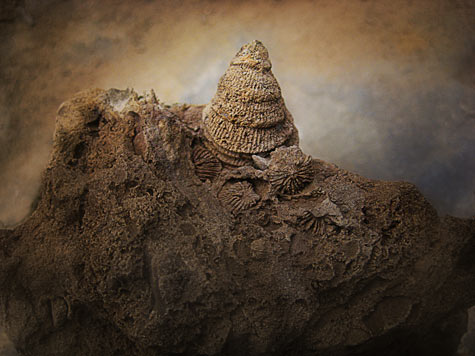 This arresting feature was guest curated by Louisa Curtis of Chatterbox Enterprises.

"I met photographer Art Murphy a few years ago when he was also working as an accomplished retoucher and printer in New York. Fast-forward a few years, add in a life-changing move from the city to the Catskills, and an already-existing interest in things past, and we have a new fine art project, inspired by nature, studying 380 million year-old fossils that are found in abundance around his home. Art has created an exquisite body of work that one minute transports us into feeling we are truly underwater, exploring for hidden treasures at the bottom of the inland sea, and then another that might remind us of ancient life forms, marine invertebrates that existed all those years ago. The images have a softness and subtlety of color that seem unlikely for such crusty remnants of old age. They are, quite simply, beautiful. Last year, prompted by an exhibition opportunity, Art's work was presented as a one-of-a-kind art book in the style of an old Catskills scrapbook, where a link was examined between the painters of the Hudson River School of Art and the earliest geologists who explored the country. To see more about the project, the book and the images, please visit his website." - Louisa Curtis

"My images are an attempt to focus on the intrinsic beauty of these early life forms and provide the viewer with a more visceral and emotional interaction - a connection between the distant past and the present, what is buried all around us as part of the evolutionary trail of life here in the Hudson Valley. As I see it, this work tends to bridge a gap between art and science. The visual manifestations of science and nature contain an often-overlooked wealth of aesthetic experience. I have the good fortune of living in a most beautiful area, tucked in the woods between the Hudson River and the eastern edge of the Catskills. Thanks to its unique geologic history, fossils abound, specifically invertebrate fossils from the Devonian Period. In many locations it sometimes seems that every other rock contains a fossil. They can appear to be so commonplace that, aside from schoolchildren hunting for them on science field trips, most of us stumble over them with barely a notice. Not long ago, I took the time to look a bit closer and was amazed at what I found. The images that appear here are part of a long-term project, a decidedly unscientific one that reflects the intrinsic beauty of these creatures from an incomprehensibly distant past. In removing any reference to suggest scale, they appear as beautiful sculptural objects seeming to grow out of the surrounding rock.

I have often said that, while the Hudson River painters hiked the area they carried hammer, chisel, and sketch book, I carry hammer, chisel, and digital camera. I shoot while out in the field, particularly when I find something too big to carry back to the studio. Most often, though, I carry bags full of rocks home. Some of the fossils are free-standing. Most are buried in rock. Once you become familiar, you can tell that certain rocks will have greater or lesser possibility of containing fossils. I carefully begin cracking them open and then the fun begins. Cracks in the rocks will often lead to well defined fossils and then I explore the patterns and designs that emerge with the camera. Sometimes a single large rock can have me busy for days." - Art Murphy

Thanks to Louisa for her work on this story. View the full screen magazine photo feature.