Harold Ross: Scared of the Dark 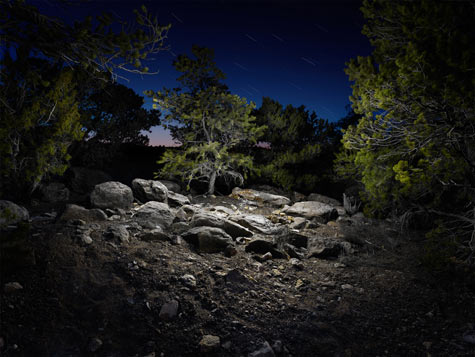 Harold Ross' series 'Night' is other-worldly, uncanny, ethereal, and rooted in his childhood fear of the bogeyman.

Harold is a practitioner of light painting: a specialized technique which requires working in a completely dark environment, opening the camera for an extended period of time, and 'painting' the light onto the subject. This reveals greater shape, texture and color, and is very much sculpting with light. What you see in his work cannot exist in nature nor in one moment in time. Instead, it's the result of a 'merging' or 'gathering' of light.

"When I was young, I often went camping in the mountains of southern New Mexico. One of the strongest memories from those trips is being absolutely terrified of whatever was beyond the light of our campfire. It didn't help that my older brother, Norman, and his friends told me horrific stories! During those sleepless nights, I was convinced that some murderous renegade or rabid coyote was just waiting to pounce on me.

I'm sure this has something to do with why I started this project. In some ways, I think that I'm dealing with the childhood fear of being out in nature in the dark. As it turns out, the first image I shot in this series (Quaker Cemetery Wall) was photographed in a place you would have never found me as a kid! I'm not afraid anymore, at least not when I have a helper with me...

One of my motivations in making these pictures is curiosity. I'm curious about just what will be revealed by the very descriptive lighting techniques that I employ. I don't really start shooting projects at the beginning, but somewhere in the middle.

The details that are present in these images can't be seen normally, as the lighting is built up over time. Normally, when using artificial light, especially light painting, one tries to be consistent with direction of light in order to make the lighting appear as natural as possible. In this landscape work, I'm not overly concerned with this, and, in fact, I'm interested in the interplay between the reality of the scene and the purposeful artificiality of the lighting." - Harold Ross, February 2011.

Two images from the series were selected for the 10th Annual International Photography Competition at Fraser Gallery in Bethesda, MD, on view through March 5th, 2011.

Get info about Harold's Light Painting Workshops in PA.