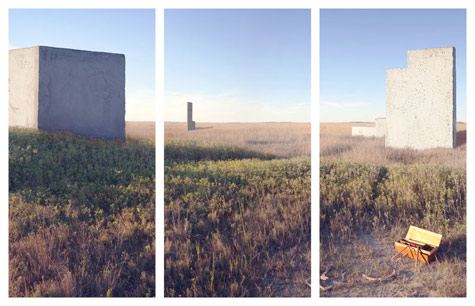 Mark Dorf is based in Savannah, Georgia. I'm thrilled this young photographer has his submission skills down pat, and whilst still in school, is surely getting his work out there. Please enjoy his artist statement and thought-provoking imagery.

"Our current landscape is one that is permeated with man made monoliths, sitting on the horizon, reforming the clean line that was once firmly established. The creation of this ever-expanding human footprint encroaches carelessly upon our environment without control at every moment. Creation can be considered one of the most powerful abilities a human possesses, whether it be through the hand of an artist, the architect or businessman, an inherent amount of power and control is given to the creator. However, this amount of control and power can grow to become intoxicating leading to devastating adverse and unseen side effects. However apparent these effects are, they are not always understood and can be ignored and seen as neutral to those who encounter them until it is too late and the potential damage has been done.

Environmental Occupations explores humanity's role of creation and its relationship with its environment. The concrete forms seen in the images, influenced by minimalist sculptors such as Donald Judd and Richard Serra, downplay any sort of expression and instead reference nothing but geometry and the dense substance that they are made from. The aggressive shape, material, and imposing presence of the objects contrast greatly against the natural and spiritual landscapes in which they are found, rendering them out of context and providing a skewed image from what is inherently reality. The question arises, where did these forms originate? Was there a creator? What are these things?

Though these forms seem to mimic functional urban horizons, they themselves are useless and loom in the landscape with a quiet devastation. The forms look to have been man made, but their sheer size and lack of evidence of construction leave the viewer with a disconnect between a specific creator and the objects - just as we see in our mass produced urban world today. The figures within the images speak to the various roles found in the process of creation, ranging from the originator to the mindless and passive observer, impotent and unaware of his or her surroundings." 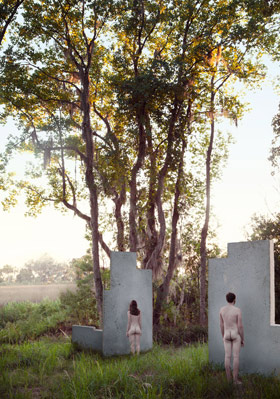 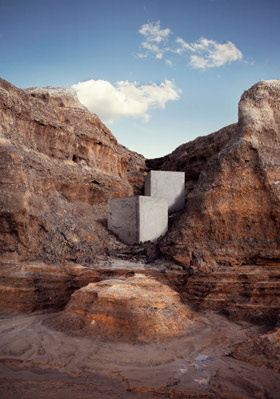