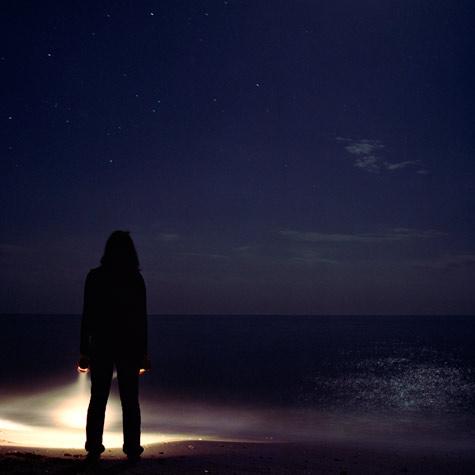 I spent a long time wading into Sonja Thomsen's work. Although each of Sonia's series warrants its own feature, I decided to chose from across Oil, Water and Re:Current. I encourage viewers to visit Sonja's own site where the layout and information add to the appreciation of her work.

Thomsen has been widely exhibited across the US since graduating from San Francisco Art Institute in 2004. Currently, images from "Oil" can be seen as part of the exhibition Earth Now: American Landscape Photographers and the Environment at the New Mexico Museum of Art, now through August 28, 2011.

"The winter of 2006 diverse circumstances came together, in which oil seemed to be the unifying factor. Trying to navigate my relationship to this war, my family, and my consumption of noxious petroleum I began photographing oil. I remain captive of this elusive and complicated substance that affects our economy and politics."

"Re:Current considers time and its cyclical nature through an installation including projection, thirty-seven still images, and motion sensitive light boxes. Conceptually the installation points to time's ephemeral constancy and considers how the stillness of a photograph can represent and distort this seeming contradiction."

"Churn is a series of 7 photographs of Lake Michigan in winter. Watching the quiet surging under the surface of water is a visceral experience. I am drawn to the aggressive movement hovering under the surface and the contrasting soft palette of the water." / "Swept is a series of 12 photographs of a white river. Each image is taken seconds apart capturing the water's response as the wind so sporadically dances across it. Each moment is its own and through the sequence one can see the invisible." / "Surface is a series of 17 images. The series explores the potential of waiter and the seductiveness of looking. Small puddles of water become glass, dense fog, toxic haze, bodily fluid, and primordial soup in my viewfinder. The unfathomable potential of water to sustain life is a phenomenon that preoccupies me."