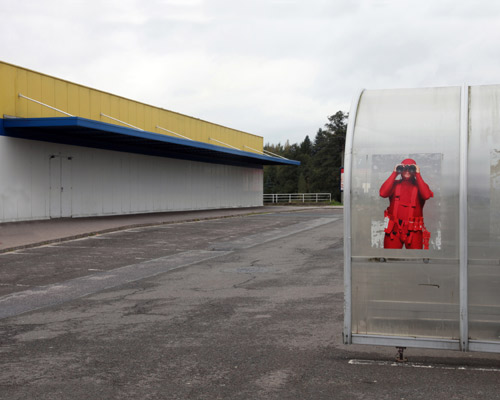 Some of my favourite features come about when one photographer refers another. Dara McGrath was referred by Miriam O'Connor, whose blog article was mentioned in the Life.com Photo Blog Awards in June. He submitted 'Boundaries', his series on Eastern European border crossings.
"My central concern lies in exploring transitional spaces, those in-between places where architecture, landscape and the built environment often intersect, and where a dialogue - of absence rather than presence - is created. My practice is driven by explorations of these charged, shifting entities - buildings that have come to the end of their functionality, the changing functionality of a landscape, human interruptions in the landscape - that exist in urban, rural and suburban contexts. The resultant photo works are realised both with the gallery space and as site-specific installations and interventions.
One of my most recent projects involved documenting the deconstruction of the former Maze Prison in Northern Ireland, culminating in a site-specific installation at the prison facility itself. Previous work has also included interrogating the dystopic architecture of the Parisian suburbs, the changing face of the new motorway system in Ireland, and the physicality of the planning system in the rural west of Ireland. I am now engaged in a long term and ongoing documentation of the European Borderlands, with a recent emphasis on Eastern Europe.
The deserted spaces of the East European national borderlands are spaces in flux. Devoid now of controls, they are in the process of being decommissioned and abandoned. No longer points on a map, but neither fully blank spaces, they are spaces-in-between, and are difficult arenas to absorb and comprehend. This photographic documentation looks at the transitory nature of the present day European border checkpoints and crossings and what it says about the relationship between society, identity architecture and the landscape in a united Europe."
View the full screen magazine photo feature.
Kudowa Zdroj Czech-Polish Border © Dara McGrath
Magazine
Share