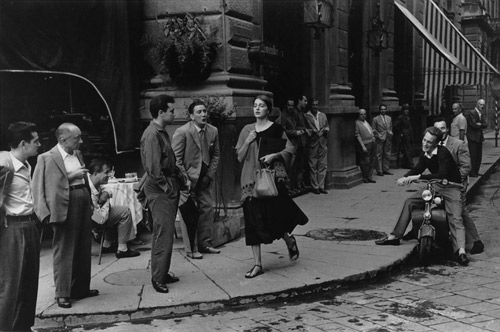 As a member of the American Photography Archives Group, in my role representing the Estate of Yousuf Karsh, I sit among some truly great archivists, including relatives of Ernst Haas, Phillipe Halsman, Inge Morath, Gordon Parks and many more. The founder of this group is the inimitable Mary Engel, daughter of photographers Ruth Orkin and Morris Engel, who also works hard representing her parents' archives.

Daughter of a silent film actress, Ruth Orkin had an early interest in film movies and was the first messenger girl at MGM Studios! "Orkin wanted to become a cinematographer; however, women were not allowed to join the union. It was not until the 1950′s when she and her husband Morris Engel made their first independent feature film "Little Fugitive." Truffaut credited the film with helping to start the French New Wave."

In Mary's words: "My mother, Ruth Orkin, had many loves. Photography and travel were two of them. When she was 17, my mother took a cross-country trip by herself, bicycling and hitchhiking from her home in Los Angeles to New York, snapping pictures along the way. She later moved to New York, where this spirit of adventure continued. She photographed Tanglewood's summer music festivals, honed her craft in nightclubs, joined the Photo League, and with her first published story in Look magazine, became "a full-fledged photojournalist." In 1951, Life sent her on assignment to Israel. From there she went to Italy, and it was in Florence that she met Jinx Allen (now known as Ninalee Craig), a painter and fellow American.

The two were talking about their shared experiences traveling alone as young single women, when my mother had an idea. "Come on," she said, "lets go out and shoot pictures of what it's really like." In the morning, while the Italian women were inside preparing lunch, Jinx gawked at statues, asked Military officials for directions, fumbled with lire and flirted in cafes while my mother photographed her. They had a lot of fun, as the photograph, "Staring at the Statue", demonstrates. My mother's best known image, "American Girl in Italy" was also created as part of this series."

aCurator is pleased to publish some of the rest of this photo shoot.