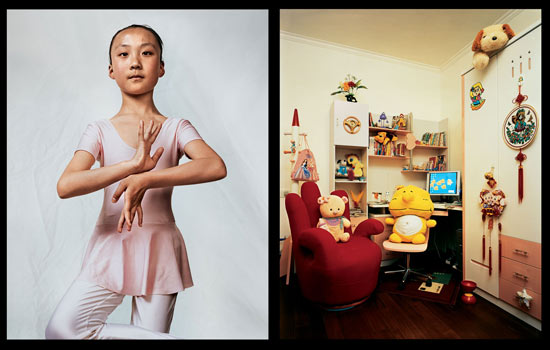 "Where Children Sleep" is an important, beautifully executed book and exhibition from photographer James Mollison. aCurator is publishing a selection in two parts.

"When, in 2004, Fabrica (Benetton's creative research centre) asked me to come up with an idea for engaging with children's rights, I found myself thinking about my bedroom: how significant it was during my childhood, and how it reflected what I had and who I was. It occurred to me that a way to address some of the complex situations and social issues affecting children would be to look at the bedrooms of children in all kinds of different circumstances. From the start, I didn't want it just to be about 'needy children' in the developing world, but rather something more inclusive, about children from all types of situations. It seemed to make sense to photograph the children themselves, too, but separately from their bedrooms, using a neutral background.

My thinking was that the bedroom pictures would be inscribed with the children's material and cultural circumstances - the details that inevitably mark people apart from each other - while the children themselves would appear in the set of portraits as individuals, as equals... just as children.

Millions of families around the world sleep together in one room, and millions of children sleep in a space of convenience, rather than a place they can in any sense call their room. I came to appreciate just how privileged I am to have had a personal kingdom to sleep in and grow.

For me, the project became a vehicle to think about issues of poverty and wealth, about the relationship of children to personal possessions, and the power of children - or lack of it - to make decisions about their lives. But this book is not a campaign. There's nothing scientific about the selection of children featured: I travelled where I could, often alongside other projects, and many of the pictures result from chance encounters, following my photographer's nose. I am not qualified to give anyone a lecture on the state of childhood today, or the future of children's rights. Although I have relied on the help of Save the Children, Italy, there is no agenda to the book other than my own journey and curiosity, and wanting to share in pictures and words the stories that I found interesting, or that moved me.

In the end, I hope the pictures and the stories in this book speak to children. Yes, so that lucky children (like I was) may better appreciate what they have. But more than that, I hope this book will help children think about inequality, within and between societies around the world, and perhaps start to figure out how, in their own lives, they may respond." James Mollison Venice, May 2010

"Where Children Sleep" was published in 2010 by Chris Boot and is available for purchase.
Magazine
Share