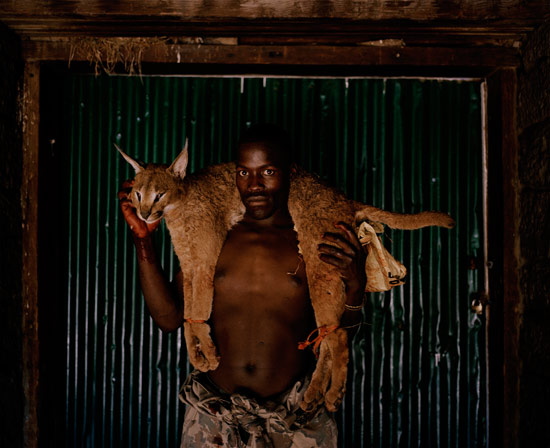 Xhosa huntsman with lynx # I, South Africa © David Chancellor/INSTITUTE
Elyse Weingarten reviews the extremely impressive book Hunters, a photographic essay by David Chancellor (text by Bill Kouwenhoven. Published by the good people at Schilt, March 2013)
"If I am rabid, I am equal to what is outside." Paula Fox, Desperate Characters.
Photographer David Chancellor's book, Hunters, explores the psychology of the hunter, documenting the safaris that comprise the big game trophy industry in southern Africa. The book is divided into two parts, the first containing over a hundred full-page photographs set deep in the African wildlife; among them, portraits of hunters and huntresses posing with their prey, in the instant after the kill. It is this exigent moment - and the hope for what it could reveal - that propelled Chancellor to join hunting safaris with seasoned, lifelong hunters throughout his adopted country of South Africa, and Namibia and Zimbabwe. Each kill is a "trophy," and the rarer the species, the better. 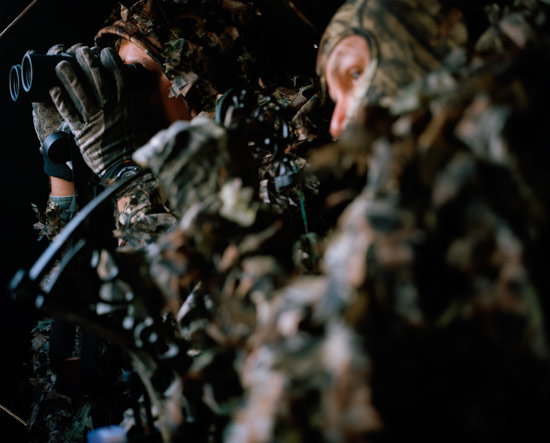 The question this book begs is "why?" Why have these hunters come all the way from their home countries to hunt animals they know to be dangerous and endangered, and come back again and again? It seems that the rush of the kill is what is being sold. The ultimate freedom is to kill, and with a hunting license, death becomes the ultimate commodity. The absence of blood on the photographed hunters, except for the occasional shirt or the ceremoniously blood-smeared face, is conspicuous. In this very lucrative business, death is sanitized.

The second part of the book contains the breathtaking photo narrative, "Elephant Story," taken near a national park in Zimbabwe. Here, the thrill of big game hunting is replaced by the consumption of game meat by a local population. The twelve photographs of this series sequentially show villagers descend upon a dead elephant and skin it, collecting the flesh for meat until all that is left are skeletal remains and bloody chunks of unusable innards. In contrast to the hunters who visit and use the gaming industry as a spiritual or aesthetic gain, those who crowd around the elephant's body are just another part of the sustainability of the natural environment. They do not shy from the blood of the animal. Here, in this landscape, death is not tidy. -  Elyse Weingarten 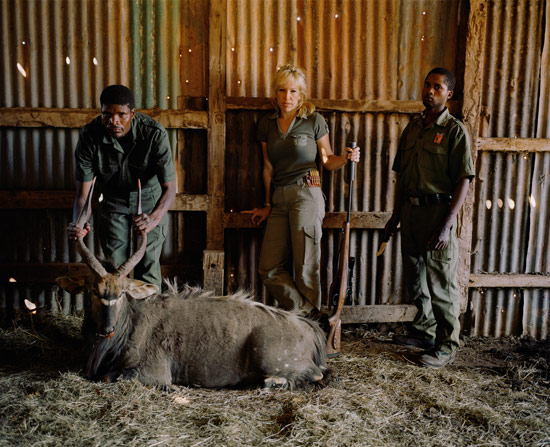 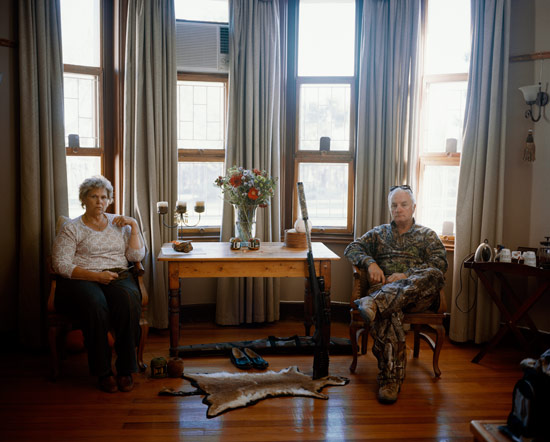 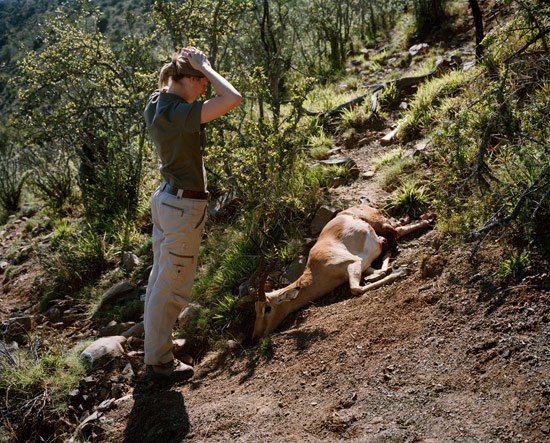 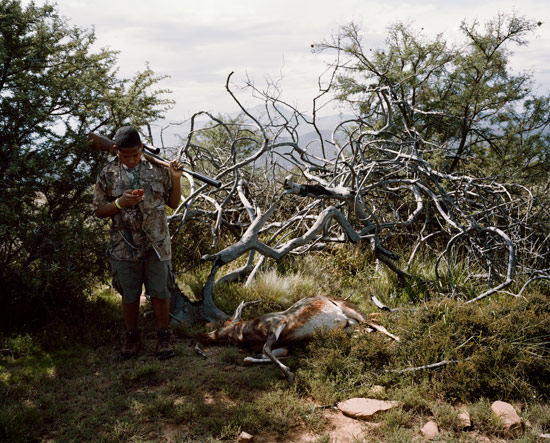 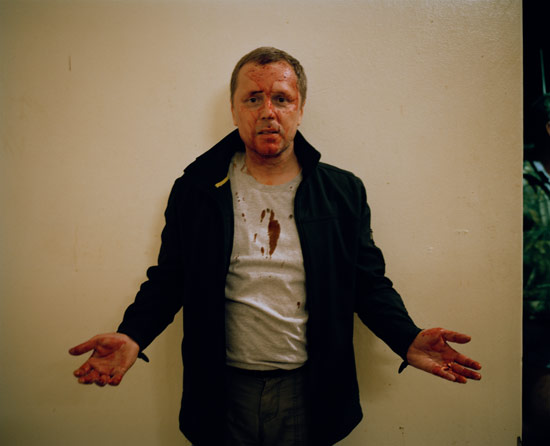 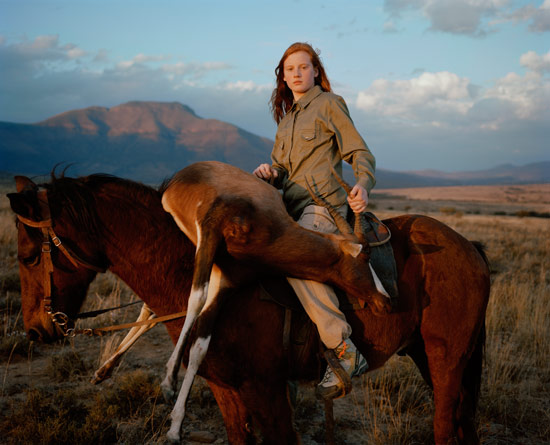 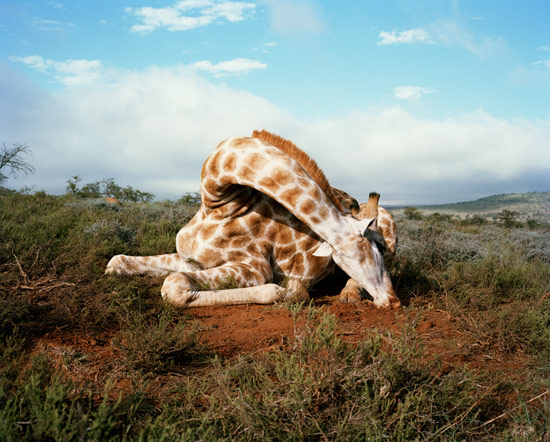 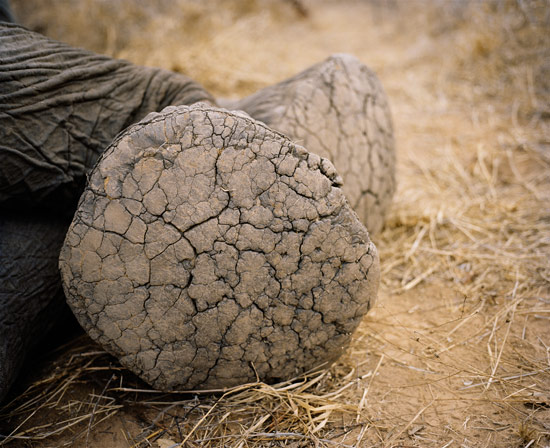 Elephant detail # II, Zimbabwe
All images © David Chancellor/INSTITUTE
David Chancellor, born in London, England, works and lives in South Africa. Many thanks go to David, to his agency INSTITUTE and to Schilt Publishing.
Books, Photographers
Share