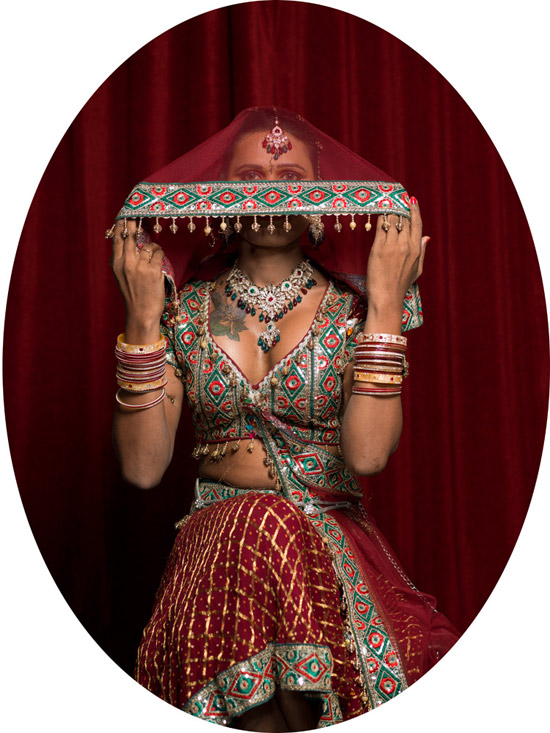 Harsha © Jill Peters
Jill Peters is a critically acclaimed photographer whose portraits explore identity, sexuality and culture, past and present. I am thrilled to publish her gorgeous portraits of the stunning Indian hijras she met on her travels.
"On my first trip to India in 2007, I was intrigued by the sight of what seemed to be a group of male cross-dressers in saris walking towards me on a bright beautiful afternoon in a New Delhi market. They were giggling and flirting with the men as they made their way through the narrow street lined with small shops. The man selling leather sandals groaned when he saw them approaching, embarrassed when they turned their attention toward him. He said something to them, one retorted, and they all burst out laughing. He turned red. I asked my guide who they were. Hijras, he said. Chakkas. There are many names for them; some of them not so polite. Then he rolled his eyes, "Stay away from them, bad news," he said.
"On my next few trips to India, I began to photograph the hijras I met on the street. As we became closer, I learned that most hijras lead a very difficult and transient life. As soon as I befriended one group we would lose contact when they moved on, got new cell phone numbers, changed cities, and disappeared. Each story would begin the same way - a little boy from a small village who felt different at an early age, cast out by his family when everyone realized he was not like other boys. Each of their stories is unique and offers a glimpse into the lives of people who are in turn marked, judged, condemned and sometimes eventually accepted by those they love."
"My intention was simply to portray them as the subjects of beauty and grace they so desperately wish to be, as if their path to nirvana had not been impeded by a century and a half of prejudice and intolerance."
Since working with Jill on this feature, India granted its "third gender" full legal recognition. An article in the Guardian states: "The change follows similar legislation in Nepal, Pakistan and Bangladesh. This means that now, for the first time, there are quotas of government jobs and college places for hijras. The decision has been cheered by activists, who say that, despite its distinguished history, the community too often faces violence and harassment."