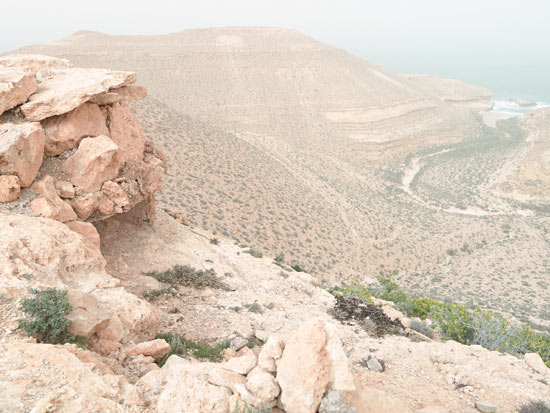 Wadi Zitoune Battlefield, Tobruk perimeter, Libya. © Matthew Arnold
"During a visit to Egypt in 2008, Matthew Arnold became enamored with the profound silence and enveloping isolation of the African desert. After a conversation with Steven Hamilton, a North African battlefield expert, Arnold was convinced that together they could trace the movement of Axis and Allied forces along the northern ridge of Africa.
"Over the course of the next two years, Hamilton and Arnold journeyed to discover undocumented World War II battlefield sites; they used cryptic wartime maps to identify locations within the landscape and uncover their historical significance. These maps transformed craggy hills strewn with desert detritus into the Bir Hacheim battlefield in Libya or the Sbeitla battlefield in Tunisia. 70 years have not yet eradicated traces of the fightin - campsites can still be foun - evident by the amount of ration tins, trench systems and pill boxes that still carry the marks of battle. Unexploded shells, barbed wire and mines still litter the landscapes of North Africa and occasionally claim yet another victim, as if the very land itself is reminding us of the tragedy of war. These photographs depict the peaceful landscape that it is today, so very different from yesterday."
Widely exhibited in the States, 'Topography Is Fate: North African Battlefields of WWII'  has also been published as a monograph by Kehrer Verlag. It includes a foreword written by Hilary Roberts, the Head Curator of Photography at the Imperial War Museums in Britain.
Arnold was recently awarded a 2013 Museum of Fine Arts, Boston, Traveling Fellowship for this project.
Learn more about this project over at Matthew's website.
View the full screen magazine photo feature.
Magazine
Share