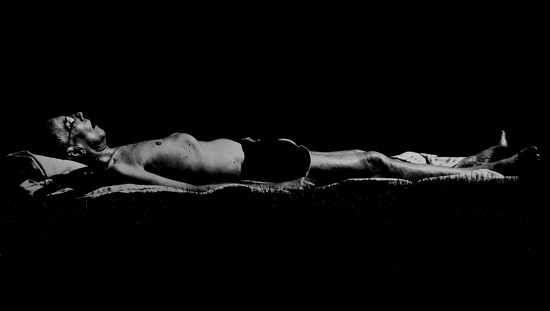 Young master photographer and printer Michael Massaia's "Deep in a Dream" series has until now shown us images of Central Park made in the wee-est hours of the night. Sometimes up to the top of his waders in the lake, or being cruised by guys, chattered to by rats or growled at by dogs, the long-exposure photographs he takes are finessed to within an inch of their beautiful lives in his homemade darkroom where he spends days mixing chemicals to outstanding effect. His prints need to be seen to be believed; they are stunning.

It turns out that Massaia has been making these sunbather photographs since 2006, concurrently with his other series, many of which are long night-time exposures: "Afterlife" consists of stunning images of a Jersey Shore pier before and after Hurricane Sandy; "In The Final Throes" shows the streets of suburban New Jersey; "Seeing the Black Dog" renders long-haul trucks at rest in stark beauty. "I tried in every way possible to visually/graphically make the environment come to life in its most lifeless moments," he says of Afterlife.

One ought probably to not ever be surprised by Michael, but still when the first "Deep in a Dream - Sheep's Meadow" sunbathers dropped in, I was bowled over. All I could imagine was him laying flat in a hide in camo. I couldn't understand how he'd get his 8x10 in there. But in fact, he's in plain sight. The final prints are small gold toned silver prints. Divine.

"Though people are the focus, my objective was to wait to capture the moment they turn into unassuming sculpted objects." It's hard at first to work out what is going on in these images. The subjects have surrendered to their environment and must have no pretensions of privacy (unlike the spying in "Through Their Windows" by Arne Svenson, which I happen to really enjoy.)

aC: I understand you set out with a large format, 8x10 camera - was it one of your handmade ones? Impractical setting up a tripod in Sheep Meadow and trying to surreptitiously photograph people sunbathing, you decided to downsize to just an RZ... All the conversations these days are about how much less intrusive an iPhone is to taking photographs, how on earth do you manage to make these with a 6x7?
MM: For about 1/4 of the portfolio I used an 8x10 camera. It was not a fancy modified one, just a standard Sinar F2. It became quickly apparent that I simply could not handle the pressure of getting so close to the subject while using such a large camera. I literally felt like I was going to have a nervous breakdown when I was using the view cameras for this portfolio, but it was tempered by my excitement over the results I was getting.

The problem was also, not so much the people I was photographing, but all the people surrounding me. It was pretty clear I had to change my working method, so that's when I switched to using a RZ67 (along with several other cameras.)

I basically used every camera I could get my hands on to accomplish this job at the highest quality.

Ironically, when I started the portfolio in 2006, I used a Sony digital camera that I hacked up to do some test pictures, and get some readings/measurements. Looking back on the images I was actually very impressed with the look of them, so I asked my friend/gallery owner, Tom Gramegna, (of Gallery 270, in Bergen, New Jersey) who has a very long relationship with Leica, if I could borrow their flagship medium format digital camera - the S - to also use on the portfolio. I've been very impressed with the results from that camera, and while it's a digital camera, I still create analog negatives from the files that are in turn contact printed on traditional fiber based silver gelatin paper.

aC: What inspired you to make a series in the broadest of daylight in the first place?
MM: I think the inspiration came from simply trying to create a portfolio that involved people in some way. The majority of my work over the past eight or nine years has been void of any people, and I thinks that's a result  of my inability to connect to most people in an earnest way.  As a result, I usually set out to document a world I can more relate to, which is usually an isolated/slightly disconnected world. But back in 2006, I saw these people laying out in the Sheep Meadow and was very drawn to how "out of their bodies" they appeared. All of the pretense was gone, and what remained was this perfect unassuming figure. I found myself being very connected to the honesty/perfection of the people at that moment. My goal was to then figure a way to photograph the people in the most exacting/intimate way. During the printing process is where I started to severely "burn" out everything surrounding the subject. This way, there is no distraction. It is just the viewer and the person.

aC: Why gold tone? Were you inspired by the burnished bathers?
MM: Gold toning silver prints can create many different types of looks. I gold toned the prints in this portfolio to create what many people would consider to be the opposite of what gold toning is supposed to do. I use a warm-toned fiber-based silver gelatin paper to print the portfolio, and for the most part, when you use gold toners on warm toned paper, it cools down/introduces subtle shades of blue to the print. The gold toning helps in making the image and print more hyper-real. I was inspired by the skin tones of the people, but my goal was to cool them down a bit, creating a bit more of a ghostly appearance.

aC: You are not a gregarious person and you seem to like to work in solitude and often at night when you might be hassled by security, or mad dogs. What about annoyed sunbathers?
MM: To this day, no one I've ever photographed, has noticed me. The last thing I ever want to do is to make someone feel uneasy or uncomfortable, but no matter what, I have to see my ideas through until the bitter end. Hopefully my luck keeps up...