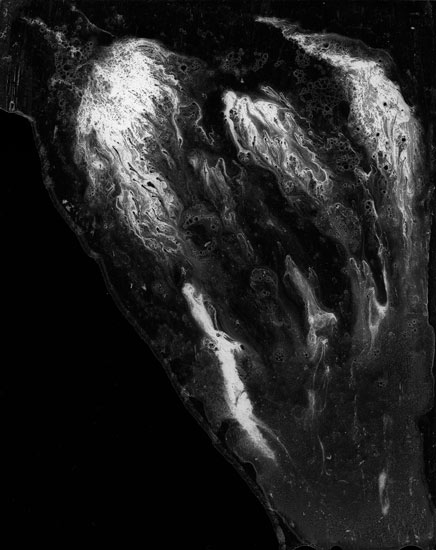 © Claire A. Warden
Claire A. Warden's 'Mimesis' series of mysterious, magical images, references her diverse ethnic background. She says "When looking at these images, the urge to ask "what is it?" echoes the question, "what are you?", a question that has been directed towards me countless times."
This confident young artist impressed me enormously when we met at the Photolucida portfolio reviews. I recognized her images immediately, having voted for her in a competition I judged earlier this year - in fact the exhibition of winners from Flash Forward opens in Toronto on October 8, 2015. She also has solo exhibition at the Center for Fine Art Photography with this same series, now until October 31, and has been selected as a Critical Mass finalist. No flies on her!
View the full screen magazine photo feature.

"I use saliva and manual manipulation as part of my photographic process, which steers the work away from the signifying functions inherent to the medium of photography. These methods are used as symbolic acts to expose the biologic and socio-cultural forces that stimulate the emergence and performance of an identity. This process produces a series of images that reveal certain truths in identity and simultaneously the inadequacies of language to describe oneself. Resembling systems of the natural sciences - microscopic, topographic and celestial - the photographs allegorize the complexity of systems that make up an individual and the perception of self."

Be sure to also look at Claire's beautiful series Salt Studies in Preservation and Manipulation.