Bill Westheimer: The Ascent of Hand 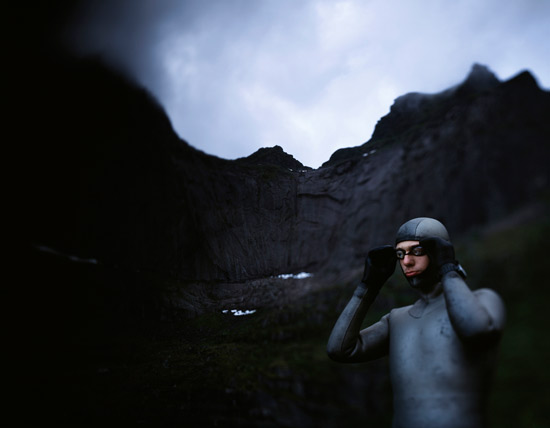 © Maja Kaszkur & Radek Polak
In 2012, Maja Kaszkur and Radek Polak spent two months traveling with championship diver Mateusz Malina in Egypt, Norway, Poland and South Africa, and a month shooting with large and medium format cameras.
"Matt comes from a modest family. Wishing to make his passion come true he worked for two years in a BMW factory in England. He learnt English to learn to dive. His familiarity with the theory is a result of persevering study of the online sources. He could not afford to pay for professional courses nor for individual training. Matt is like Rocky Balboa. People love him as he reminds them of themselves. He is not a star of superhuman abilities. He is just a young man from Ustroń who reached the highest peaks thanks to his great determination."
View the full-screen magazine photo feature.
Magazine | Permalink |
Share 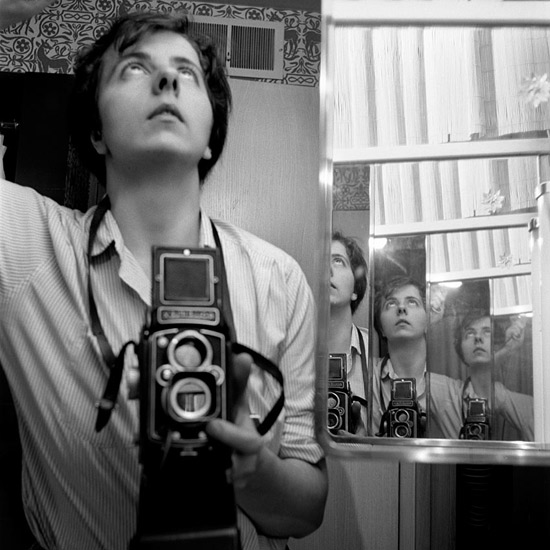 Image via the Maloof Collection, Ltd.
Here's another post from my guest contributor Elyse Weingarten.
The surprising discovery of previously unknown street photographer, Vivian Maier, has been ubiquitously reported internationally for the past two years. Maier, who worked on and off as a nanny in Chicago for almost forty years, prolifically photographed the city's streets on her days off, ultimately creating a body of work that has been compared to such twentieth-century masters as Henri Cartier-Bresson, Weegee and Diane Arbus. 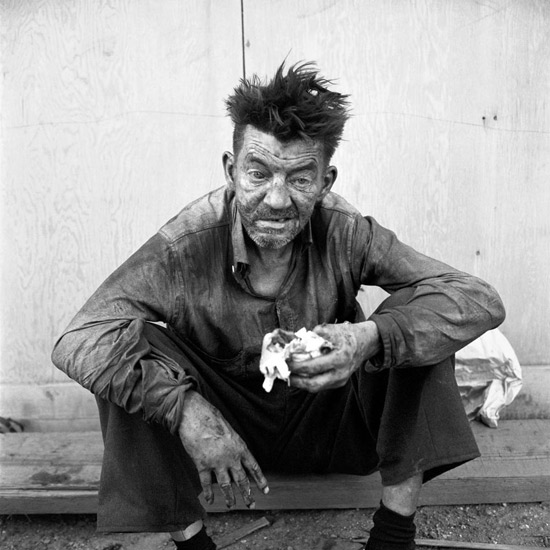 In just a short time, Maier's work has been in exhibitions throughout the world and curated in two book published by CityFiles Press, with another book set to come out later this year; a documentary about Maier and the discovery of her work, 'Finding Vivian Maier,' is also currently in production. John Maloof, a local historian in Chicago, uncovered Maier's work when he bought a trunk full of prints and negatives at an auction house selling off Maier's belongings from a storage locker she'd left unpaid. Part of Maier's meteoric rise in popularity is undoubtedly due to the spectacular nature of how her work was uncovered. This, and the narrative of Maier's life, overshadows her photography; like many touted artists, she is known more as a personality than for her work. 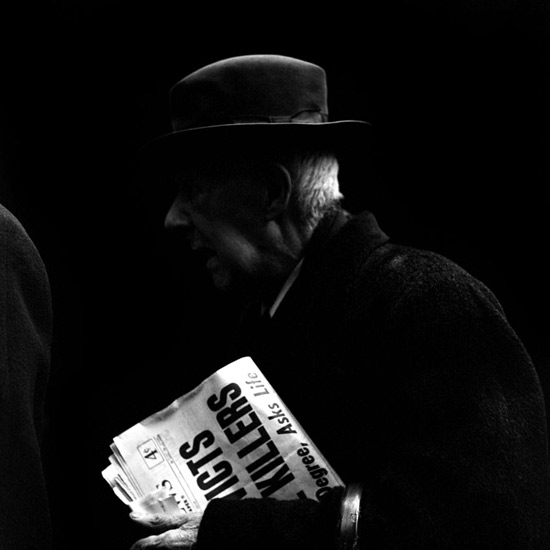 In Maier is the unraveling of one of our most necessary social myths. In the name of societal order and reason, we must live with the illusion that the external self presented is the veracity of one's entire character, a near reflection of their interior being. That anyone could hide such a significant piece of their life brings us to a state of wonder and awe. It seems so anomalous that it, like a good piece of gossip, becomes a story to be told over and over, juicier with each telling. 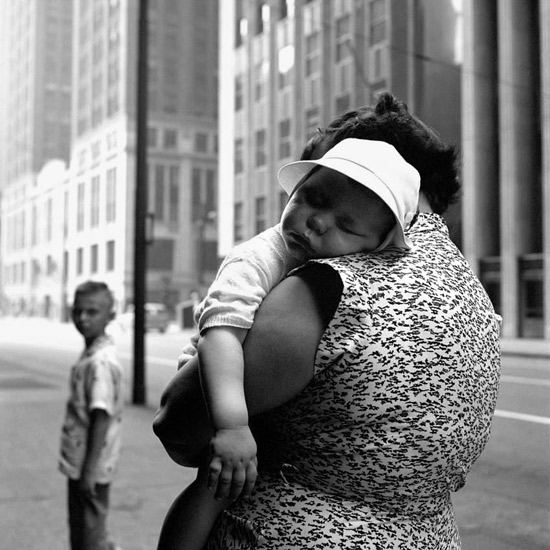 It is interesting to note that this division between the private and public selves rests at the foundation of photography. If we walk around with only our outsides showing, the camera, in gifted hands, is a device to illuminate our emotional exoskeletons. So glued in place are our facades, it takes an artist to raise them. - Elyse Weingarten. 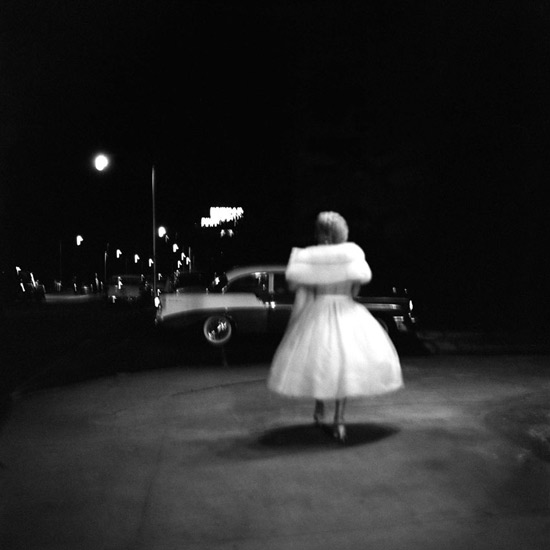 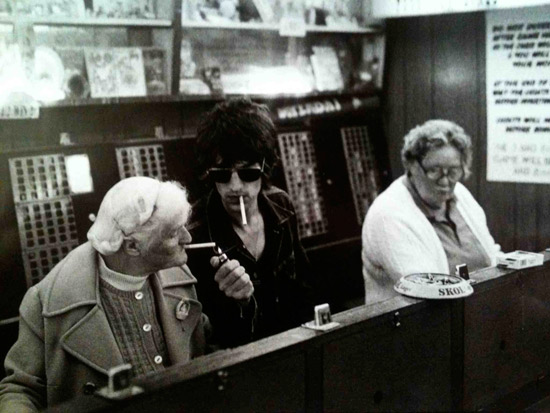 © Mary Scanlon
There seem to be more and more and more photo-related events going on, worldwide.
"The Photo Art Fair is a four-day exhibition of carefully curated, collectable works from up to 50 international photographers. As a brand new show, the Photo Art Fair is designed to provide visitors with the unique opportunity to purchase collectable photographs direct from both undiscovered and emerging artists." It is taking place at London's Victoria House in Bloomsbury Square, from May 3-6, 2013, and will also feature panel discussions and all that stuff. There is a fee for becoming an "intelligent collector;" it's £7.50 in advance or a tenner at the door.
Exhibitions | Permalink |
Share 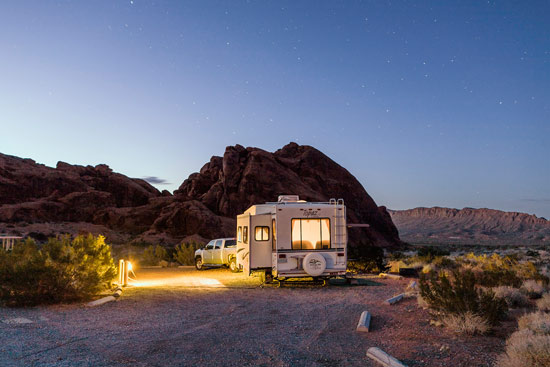 © David Gardner Short-listed in the inaugural theme "A Modern Life" whose series Marking Our Place was published in aCurator around this time last year.
Life-Framer hit my radar a couple of months ago and I remember emailing my old man: "Interesting model?" Now they have held their first monthly theme and announced winners, and are looking for entries for the next. Here's the deal:
1. Take some photos for each monthly theme
2. Upload them and pay (1 image = $10, up to 3 = $20, up to 5 = $30)
3. We narrow it down to our 10 favourites each month, from which a special-guest judge picks their winner and runner up
4. You get some great monthly prizes and exposure
5. We exhibit all of the winners and runners up in a special end-of-series exhibition in London
Life Framer is crowd sourced; "both the content and the funding to run an exhibition at the end in a London gallery, theprintspace. We hope it's a little different from the myriad of other awards that are out there, and is of real value to photographers."
Although this is judged by photographers, and I do worry about photographers being stuck in a feedback loop, I do think there is value in the online and offline exposure and, well, a bit of cash, which some competitions don't offer and which is always nice. There's no rights grabbing, they'll sell prints for you without a commission if you're in the exhibition - it seems like a straight-up, fairly appealing arrangement. 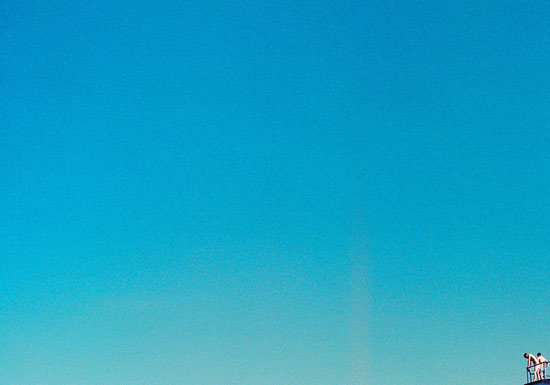 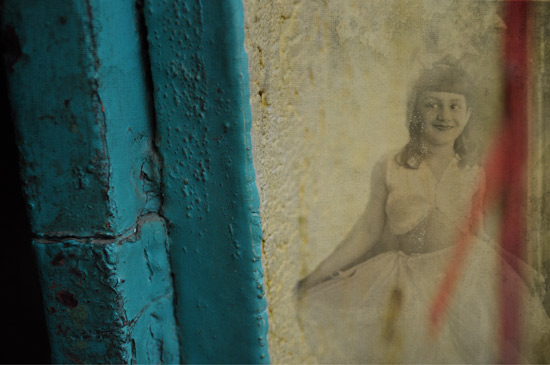 © Giovanni Savino
A sweet, thoughtful project by Giovanni Savino morphed into a personal effort to preserve a piece of local history.
"A couple of years ago, in a small Dominican town near the Haitian border, I met and became friends with Georgette Michelen and her family. Georgette lives in a beautiful, enormous wooden house her father built at the beginning of last century: 'The House of the Sun.'
Take an informative trip to the house with Giovanni's virtual tour.
"The house has thirty-three external doors and it shines in a decayed, almost surreal beauty, replete with a long, fascinating oral history, virtually embedded in its walls. With Georgette's blessing, I embarked on a completely self-financed project: an extensive photographic exploration of the house, for nearly two months.
My work was primarily motivated by a sense of impermanence I shared with Georgette; a feeling, perhaps a certainty, that this house and the marvelous mnemonic capsule it embodied wasn't to last much longer due to Georgette's age as well as to a brutal agenda of urban 'modernization,' quite rampant in many Dominican cities nowadays.
While brainstorming with Georgette on how to save and protect the house in a bleak-looking future, I promised her that I would try to edit the best shots as well as some of her thoughts and recollections, derived from the many audio recordings, into a book. Two years and many working hours later, on my own and with the help of several friends of mine, both a self-published book and a website now exist: my humble contribution to preserve at least some of the images, sounds and memories associated with this wonderful building, if not the building itself.
I recently had the immense pleasure of traveling to see her in the Dominican Republic and present her with a copy of the book. As she turned the pages, almost in disbelief, her face glowing, she would only stop smiling to thank me over and over again for all my hard work and commitment. Hopefully, through the book and some web presence we will find someone interested and able to help preserve the incredible house her father built."
Buy the 'Thirty-Three Doors' book.
View the full screen magazine photo feature.
Magazine | Permalink |
Share 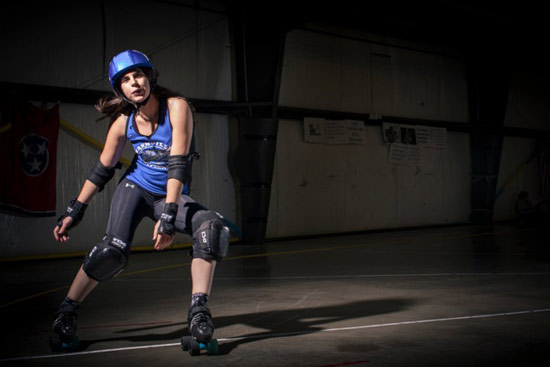 Photographer Tom Griscom teaches at The Nashville Art Institute. These images are a selection from his recent location lighting class, which contains just six students. Tom says "I created this class as if we were a working studio. I booked a bunch of shoots, we scouted the locations, came back and looked at the clients' past photographs as well as samples of similar shoots. We designed the light and tested in the studio, then on the dates the shoots were booked, we went on location."

They spent three days photographing The Roller Girls and their coaches and refs - 40 people in all, and they will get to use some of the students' images for promotion. I wish I'd had more opportunities to photograph things like this when I was in school, it all seems very dull in hindsight. 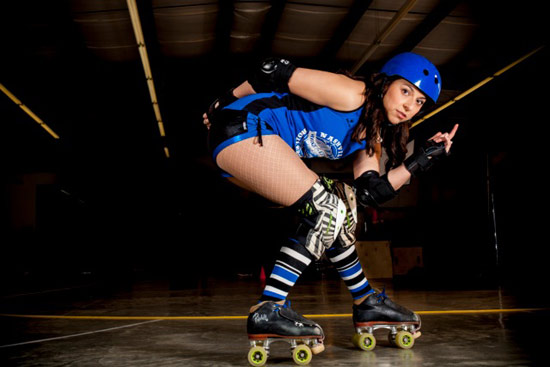 © Daniel Babcock
This is the kind of teacher I wish I had. "I cannot stress how immensely proud I am of this group. I am entering my 7th year as a teacher, and this is probably my most memorable class as well as being one that is probably going to transform my whole approach to the classroom. The Roller Girls are an amazing bunch of ladies. It is interesting, theirs and our story is very similar. I stressed to the students that when it comes to working in the world of photography, that this type of work is so dependent on being a team. It is somewhat analogous that we became a team while photographing an amazing team." Tom Griscom 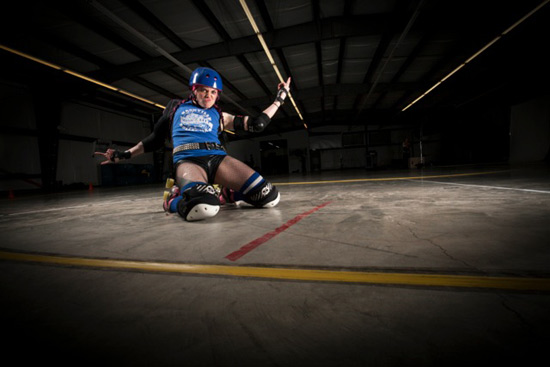 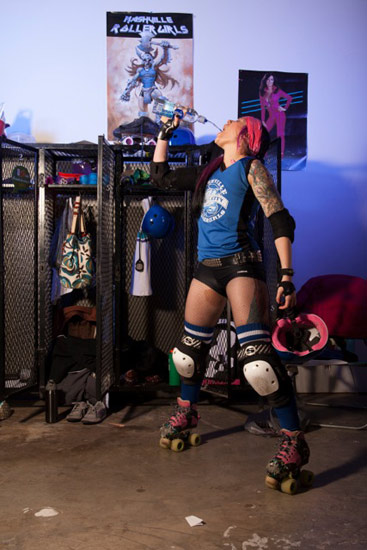 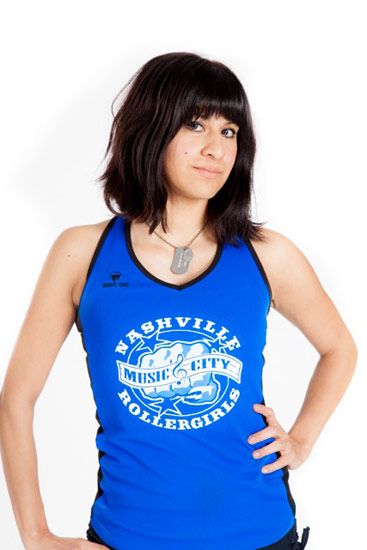 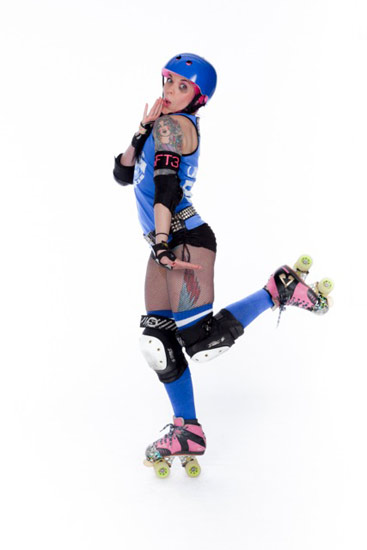 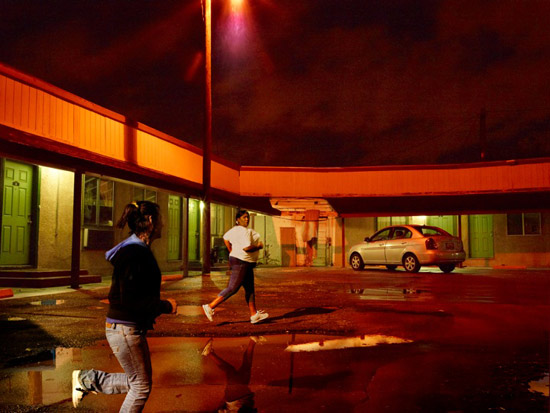 © Tabitha Soren
Some new images from Tabitha Soren's "Running" series, previously published here. Tabitha's solo show at Kopeikin Gallery in LA opens soon.
The gallery says "In Tabitha Soren's photographs, archetypal figures struggle to escape or arrive - the viewer cannot be sure. Uncertainty, chaos and vulnerability infuse Soren's universe. These are elemental fears made visible. Movement provides an opportunity for loss of control, un-self-consciousness. A theater of the absurd unfolds as she describes our shared instinct to survive. Her figures stumble, grimace and lose composure. They are both wounded and heroic."
Go see! The exhibition, erm, runs from April 13 - May 18, 2013. 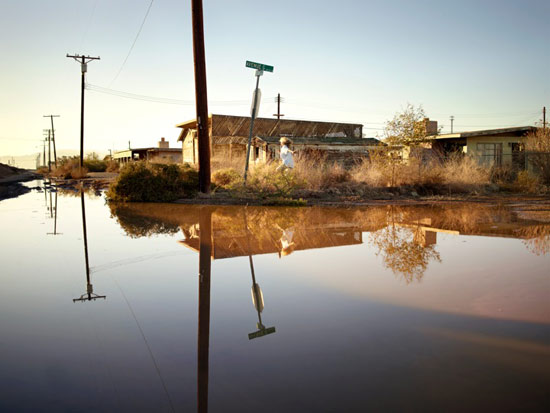 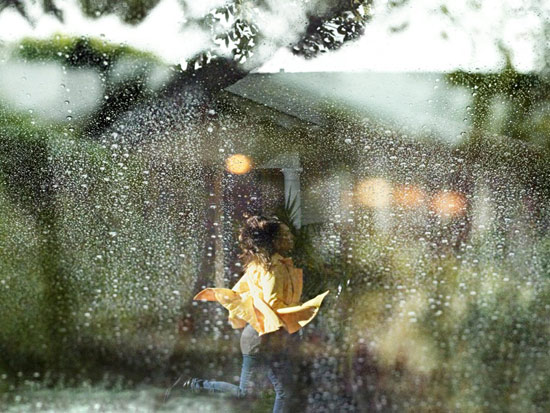 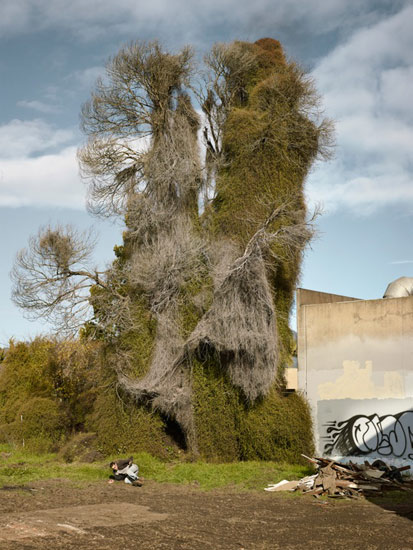 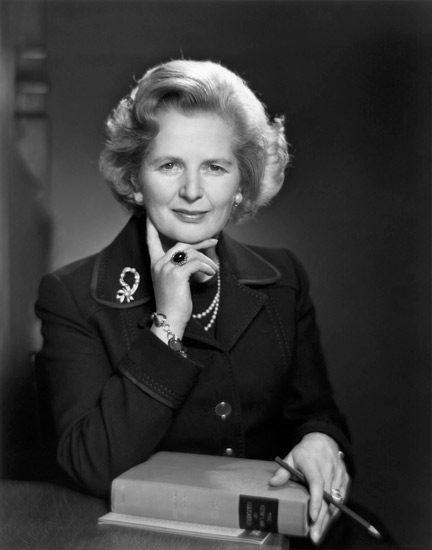 Thatcher, 1974 © Yousuf Karsh
Here she is, looking as if butter wouldn't melt. Bye, Maggie. Mandela outlived you, which is very satisfying. Rest in all the peace you deserve...
Karsh, Obits | Permalink |
Share 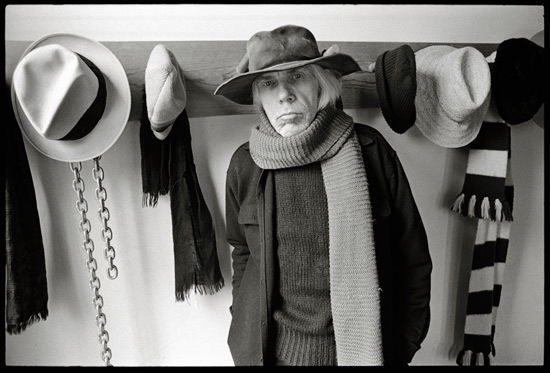