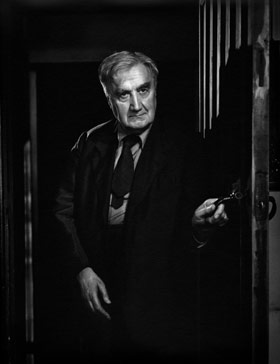 In the fall this year the Cantata Singers begin their Ralph Vaughan Williams season in Boston. "Cantata Singers inspires, engages, and challenges listeners through daring juxtapositions of music old and new, compelling programming, and exceptional artistry." 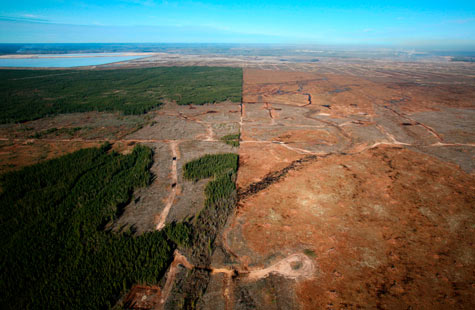 "Alberta's tar sands are arguably the world's most destructive energy project in progress today. Being Canada's main economic driver, and a favourite source of 'safe' energy for its big neighbour down south, the tar sands are a hotly contested issue between the provincial and national government, environmental groups and the indigenous people of Canada who by and large are opposed to the breakneck speed of oil industry developments.

Stretching from the town of Fort McMurray northwards and as far as Peace River to the west, the confirmed deposits of bitumen in the ground take up an area the size of England. To date, only three to five per cent of the existing deposits are being mined or extracted, by inserting high-pressure steam into the ground. Turning bitumen into synthetic crude oil is no easy task: it requires vast amounts of energy and water, and the yields have only become viable with an exploding per-barrel oil price. For thousands of years, Alberta's prime resource has lain idle in the ground, oil companies patiently awaiting their turn until prices went rocketing in the last decade. The once sleepy town of Fort McMurray has been turned into the new frontier of the latest gold rush, absorbing the gains and ills that come with it: rapid growth, high prices, a huge influx of workers, crime, drugs and pollution. Walking down the bland main drag of the aptly nicknamed 'Fort McMoney', you can't help but notice that anybody who is anybody in the oil business has set up camp here: Shell, Total, Chevron, Syncrude, Suncor, CNRL, BP, Husky, Statoil and numerous others have bought up leases to extract the black gold from Alberta's land.

This comes at a high cost, both in terms of investment and natural resources as well as to the environment and the people who live there: the divisive issue is one of land rights and health concerns of Canada's First Nations who live downstream from the tar sands. Is Canada to respect aboriginal land rights, as enshrined in their treaty with the Crown over a hundred years ago which grants the First Nations the freedom to hunt, fish and trap according to their ancient ways? Or is it more interested in oil developments with their consequential destruction of the boreal forest, bringing of employment, and ultimately, money?

For many years, the First Nations in northern Alberta have been complaining about grave health concerns and unusually high cancer rates in their communities - a concern apparently not shared by the Province of Alberta. On another level, several First Nations have begun to legally challenge the status quo and the sale of their lands to oil companies. It is a fight that is synonymous of the classic David vs. Goliath: small and mostly poor communities on the one side; big oil, government, and heavyweight lawyers on the other.

One thing is for sure: the future is set to be challenging, and a mighty struggle is looming."
- Jiri Rezac, July 2010
View the magazine photo feature.

Get Off My Lawn 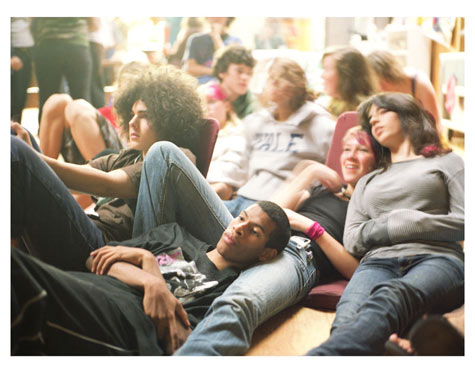 There are 222 hand numbered copies and each of the 11 photographers has their own cover.

*Yousuf Karsh would say, you may have a camera and eyes, but until a certain age, you don't really see.
Books | Permalink |
Share 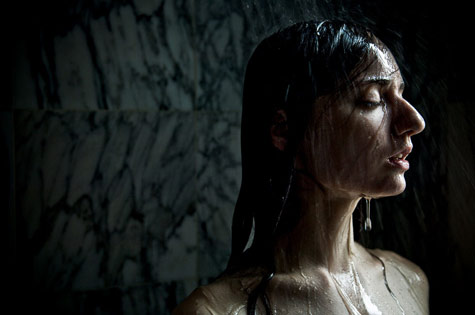 Manjari Sharma's Shower Series was probably the most talked about by the reviewers at the end of ASMP's fine art portfolio review in May. Her bathroom confessionals really stood out and Manjari spoke about the personal project with true passion, being amazed herself at how her subjects had let go once the water hit them.

"Secretly I have been told by my subjects that it is thrilling and adventuresome to be in my shower; Secretly cheating my traditional and tame Indian upbringing I live through all of my subjects; Fighting their wars and braving their fears for those few hours where we are connected through this pious space."

Fast forward just a few short weeks and not only has she received a lot of press, she won a commission to shoot an ad campaign for Grohe.

"Custom showers were built in a studio and a series inspired by my personal project was recreated in New Delhi. Ten Indian models were selected for the shoot and the result is currently being used on billboards in several cities in India."

So there you have it: follow your passion, shoot what you love, devote time to personal projects and then present them eloquently, to as many people as possible.

See behind the scenes on Manjari's blog. 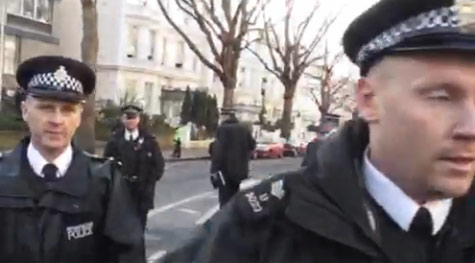 From The Guardian: Two journalists in London have received a payout from the Metropolitan Police after the Met admitted failing to respect the freedom of the press during a protest at the Greek embassy in London in 2008. In this disturbing video one cop taunts the photographer like a school kid as he's yanking the guy's camera off his neck, and later they mutter "scum" under their breath.

In letters sent to the journalists, the force said "The [Met] confirms its recognition that freedom of the press is a cornerstone of democracy and that journalists have a right to report freely. [We] recognise that on 8 December 2008 they failed to respect press freedom in respect of Mr Vallée and Mr Parkinson." Both men received £3500 in compensation.
News | Permalink |
Share 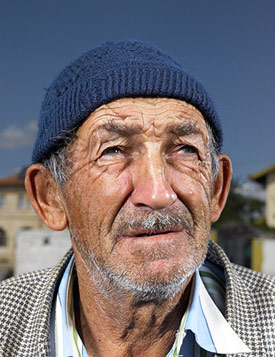 In Dirk's blog, The Heavy Light, he gives us the opportunity to learn a lot of interesting things about who he shoots, how he shoots and indeed why he shoots!

He sent me a printed magazine of 'The Sultans' a little while ago, and has just written up the back story on how some images taken in India led to his project on older Turkish men. Make some tea and check out parts 1 and 2. 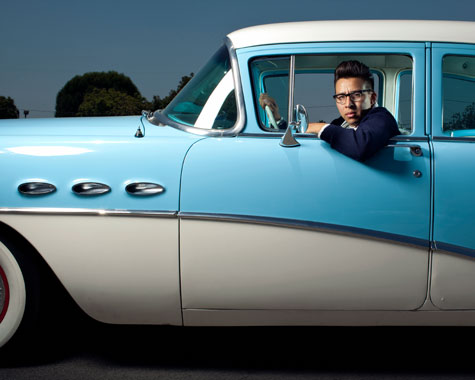 "Few things in this world make sense to me. Photography, and the lyrics of a man who sounds like a muppet crooning, happen to be two exceptions. I am attracted to people who find a way to manifest their obsessive qualities into something physical. 'Carnivores and Destructors'* documents people infatuated with the pop singer Morrissey and the various dimensions of this fixation.
Enjoying a band is an abstract idea - the individuals I chose to photograph translate this into something beyond just music and integrate these concepts into a tangible experience and way of life.  Somewhere in this self imposed isolation, comfort and safety are found, and that is what fascinates me." - Adam Krause

It isn't every day that a submission speaks to me in the way Adam Krause's did. We share a huge love of Morrissey, and with these great photographs this was an obvious feature for aCurator.
View the feature.
© Adam Krause  * (lyrics from 'Ouija Board Ouija Board' - Ed)
Magazine | Permalink | Comments (1)
Share 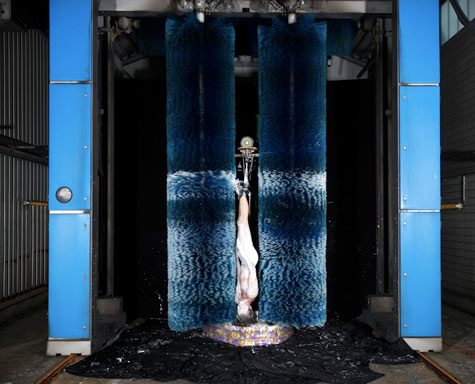 John Cyr, photographer of the 'Developer Tray' series, invited me to the SVA gallery in New York's gorgeous Starrett-Lehigh building in Chelsea to view the Photo, Video and Related Media graduates' theses. Cyr's prints look as stunning on paper as in my magazine!
Among a lot of interesting work (surprisingly, plenty shot on chrome and neg as well as digital) I was particularly drawn to Janosch Parker's 'Primordial Ooze Ensemble'. I saw large oil painted canvases that I understand he had made in China. "...the result of a series of performances in which Parker, also known as Jan Ebeling, submits to a number of vulnerability tests. Employing ingeniously designed mechanical devices and organic substances ('primordial ooze'), Parker seeks to express with self-deprecating wit our precarious human condition. Based on photographs of performances, these oil paintings evoke the grand tradition of European history painting."
Wash © Janosch Parker
Exhibitions | Permalink |
Share 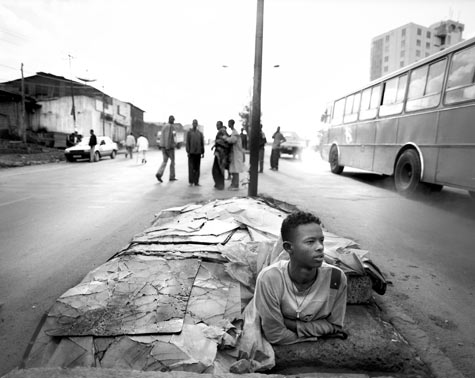 "I was working on a travel story in Ethiopia when I heard about the estimated 80,000 children living on the streets of Addis Ababa. I extended my stay by a few days and start researching and photographing the story. Through a local NGO I was able to make contact with Bruke, a 15 year old boy, who like thousands of other street children had sought refuge underground, making his home in a small drainage hole in the middle of the road. The Merkato commercial center of Addis Ababa has become the de facto place for Ethiopian children escaping rural poverty, AIDS, abusive families, the clutches of indentured servitude and human trafficking. Thinking they have found a haven, they instead find the Merkato a harsh and dangerous environment. These children face the obvious daily struggles of finding food, protection and safety, and are forced to deal with the lingering and constant threat of sexual predators who prey on the vulnerable street children. With no social welfare system and the lack of enforceable child rights in Ethiopia, the children find themselves, in essence, in a state of civil death - the legal status of a person who is alive but who has been deprived of the rights and privileges of a citizen or a member of society.

I spent two days with Bruke, learning about what brought him to the streets and how he survives. For a short while I was able to get sporadic reports on his well-being from my fixer who passed through the area. For the last 2 1/2 years I have not had any news. I am planning to return to Ethiopia later in the year to expand on the work I started there, and with the hopes of finding Bruke again." - Jason Florio