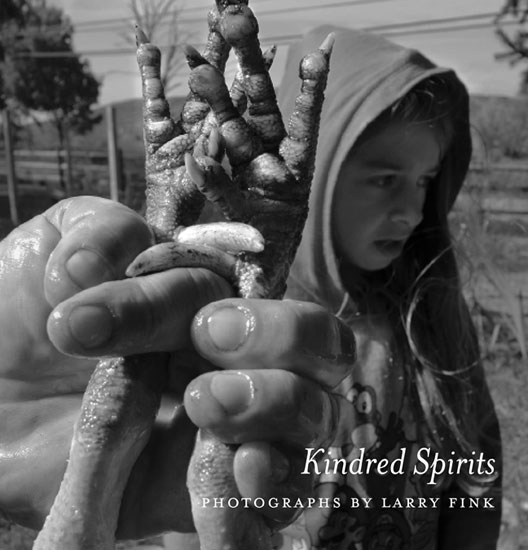 Michelle Dunn Marsh has been in the world of book publishing for 20 years. She and her partners have recently launched a new company, Minor Matters, that is printing under a non-traditional model, sort of print-on-demand. Books are $50 and they only go into print once a minimum of 500 buyers have committed.
Why 500 people?
"We are interested in cultural resonance and in community. It is our belief that if we cannot generate a minimum audience of 500 people willing to commit $50 for the project to exist as a book, then the work may find its public life in other forms. A minimum of 500 orders at $50 is a break-even financial proposition."
In a recent interview Marsh said "Aperture is the right fit for some, Taschen or Chronicle are the right fits for others. I'm not looking to do books that are going to sell 10,000 copies, frankly. We've developed a more boutique model. It's not about taking away from what those institutions are doing, it's about adding to it."
The first 500 people who purchase are even listed within the book and each title will be given six months to reach the target 500+.
Fancy a Larry Fink book? Go put down your dosh now! 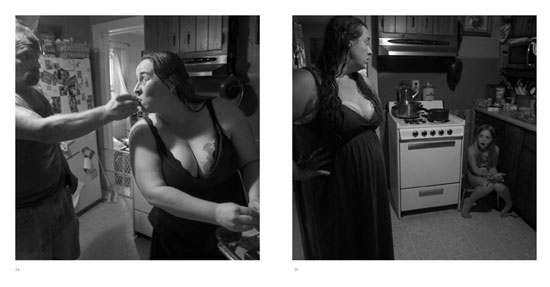 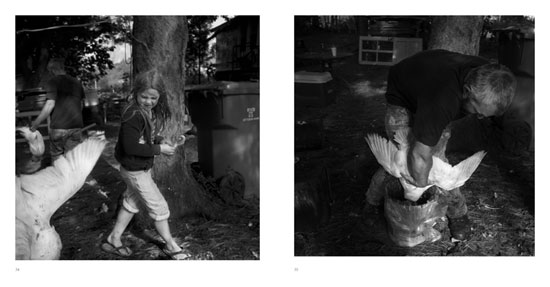 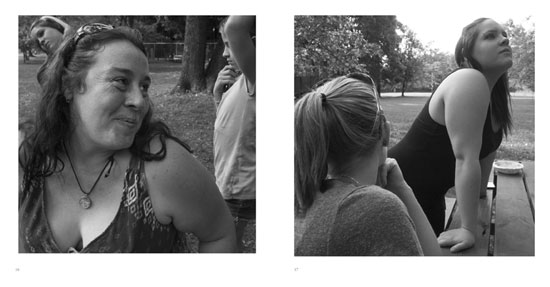 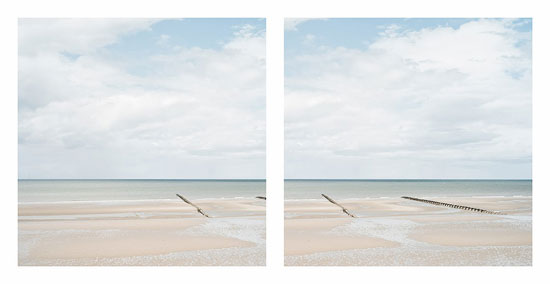 Flintshire, from the series 'Brighter Later' © Brian David Stevens
A Fine Beginning is a collective showcasing contemporary photography made in Wales. Their exhibition, "Made in Wales," features 17 artists, including friend of aCurator and generally top man, Brian David Stevens. Mark your calendars for March 14, 2014.
"A Fine Beginning, from which this collective takes its name, is the first chapter of Dylan Thomas' unfinished novel Adventures in the Skin Trade. The central character of the story leaves his parents home in South Wales for Paddington Station and when asked where he's going, Samuel Bennett replies, 'I don't know where I'm going, I haven't any idea in the world, that's why I came to London'." 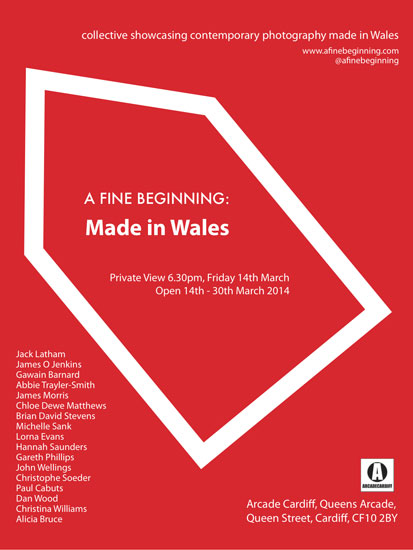 See Stevens' feature on Billy Childish; his Remembrance Day project They That Are Left; and Portraits.
Exhibitions | Permalink |
Share 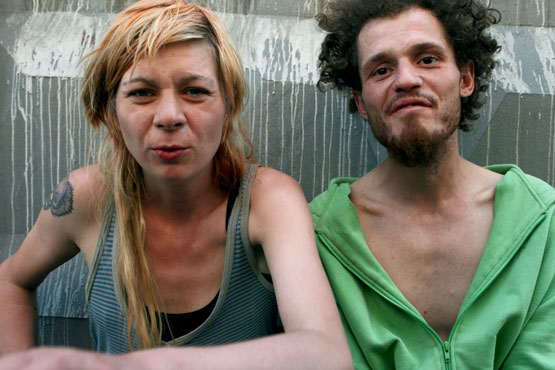 Lilya and Pasha, 2008 © Irina Popova
In 2008, Irina Popova was on assignment looking for a story about 'feelings.' "I met Pasha and Lilya the day after getting the assignment for the project. You could say that I got lucky. Last year I shot a similar couple that kept their child in the basement."
This controversial photostory has now been published as a book by the Dostoevsky Photography Society. Since I don't have my copy as of writing, here's the blurb from the preface.
"This fascinating book tells the story of Irina Popova's stay with a family of drug-users in St. Petersburg, Russia. The photostory - focusing on a small child living in shocking family circumstances - has provoked an explosion of criticism on the Internet, directed towards the parents as well as at the photographer. The book reveals the documentary evidence during the development of the story, including the previously unpublished photos from the archives of the photographer herself and the characters, the web pages of blogs with comments, the private letters and the diaries. It attempts to analyze the consequences of the photographer's actions and the degree of responsibility of the photographer. The multivocal storytelling in the book forms the screenplay for a real-life drama. This is the first time this frequently discussed topic of the supposed responsibility of documentary photographers has been analyzed so consistently and comprehensively in book form. This book is therefore more than simply a documentary photo book depicting the deplorable situation of a drug-addict family - it is an essential document dealing with the question all documentary photographers may be confronted with at some time in their careers: can I continue working or should I stop and try to help solve the problem I am witness to?"
Read an extensive article in The Guardian about what happened when, having been shown in a well-received exhibition offline, the photographs subsequently hit the internet.
View the full screen photography magazine photo feature.
Magazine | Permalink |
Share

Yousuf Karsh at the Jewish Museum and Tolerance Centre, Moscow 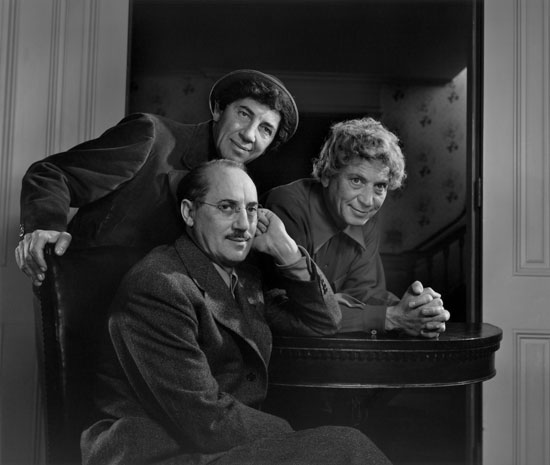 The Marx Brothers, 1948 © Yousuf Karsh
We are proud to have this portrait of the Marx Brothers presented as part of the supporting materials for the Jewish Museum and Tolerance Center in Moscow's exhibition "Andy Warhol: Ten Portraits of Famous Jews of the Twentieth Century" which is on now. There is an interview with the curator on the New Contemporary website about the differences between this exhibition and its original that showed at the Jewish Museum in New York in 1980.
Karsh | Permalink |
Share 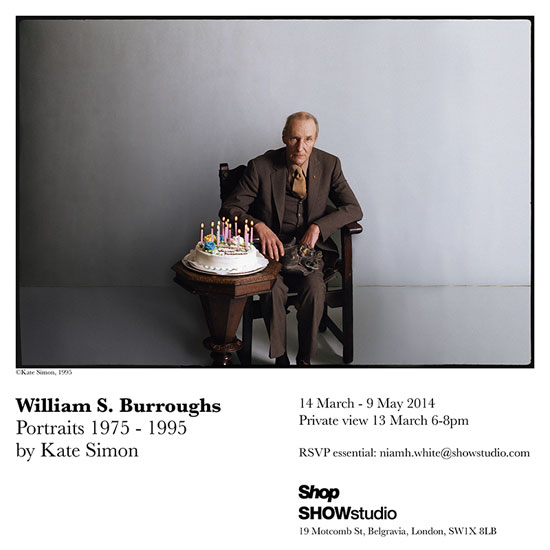 One of my faves, Kate Simon. London go see.
Plus there's the exhibition of Burroughs' own photography through end of March at the Photographers' Gallery.
Exhibitions | Permalink |
Share 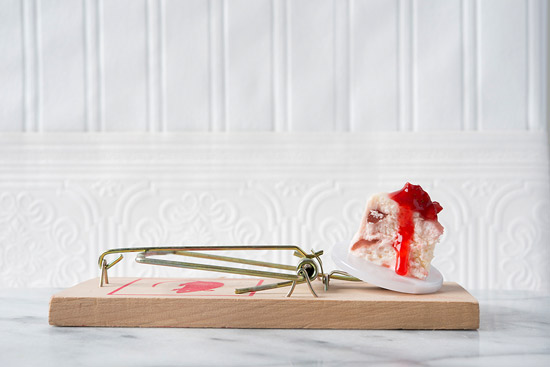 Cheesecake © Davide Luciano. Styling by Claudia Ficca
Partners Davide Luciano and Claudia Ficca produce ridiculously fun images. Yes I'm a vegetarian and squeamish about catching meeces. But if I were a mouse and I saw one of these, I'd definitely call a meeting.
'The inspiration for Gourmet Mouse Traps came to Davide after a week-long cheese advertising shoot in NYC. "I was in a cheesy state on mind that week" says Davide. The idea came to him while he was riding the train after a long day on set. "When I told Claudia her eyes light up, she pulled out a pen and paper and instantly created the menu."' Brilliantly bonkers. 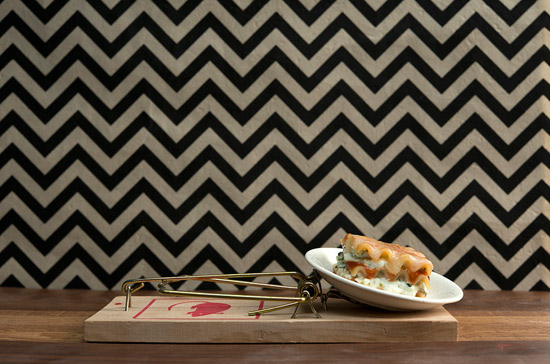 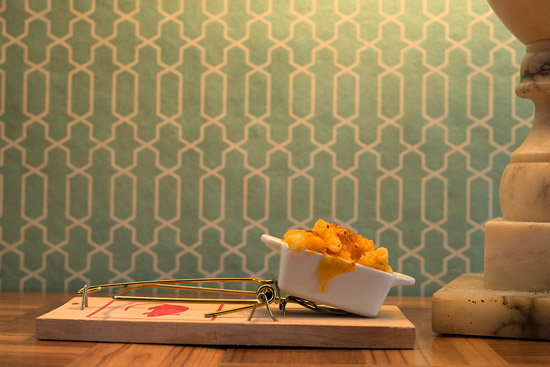 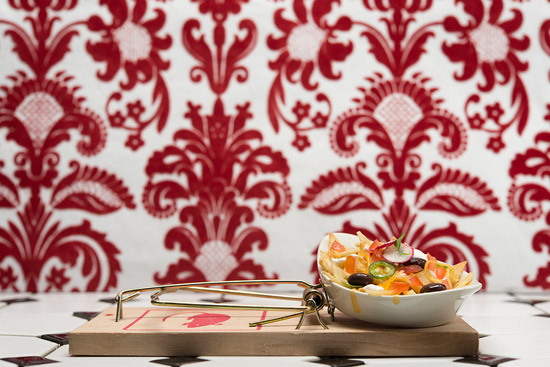 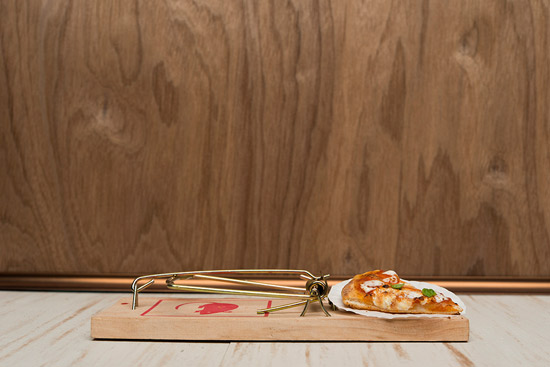 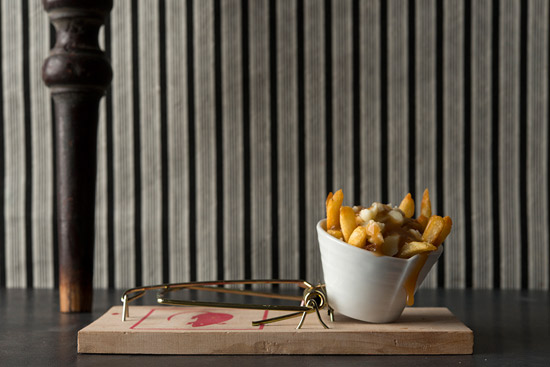 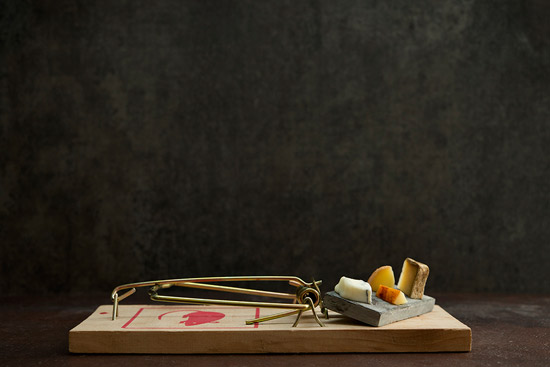 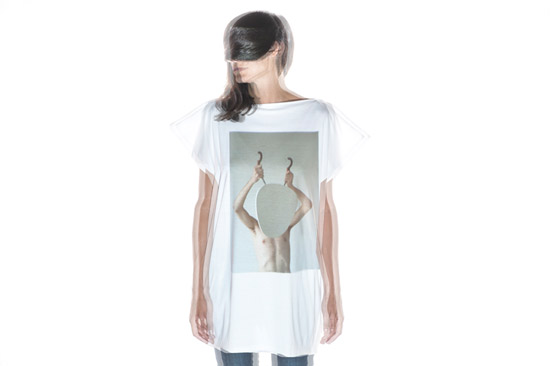 © Silvia Pastori
Ahh, the web. Italian fashion/art project, teeshare, found the lovely feature 'Act' from French photographer Denis Darzacq, (whose work was originally introduced to me by the Curator for the Karsh estate), and dropped me a note to tell me about the line of limited edition T shirts they are producing with Denis. Edition is 20. €85,00.
"Teeshare isn't just an original t-shirt, 100% cotton made and handcrafted in Italy, ethically fashioned in artisanal workshops. It's also a means of expression. Which is why we decided to work with artists: so their artworks and their message can go around with the person wearing their teeshare tee."
Because you may as well produce your own, before a dodgy clothes company does it behind your back. 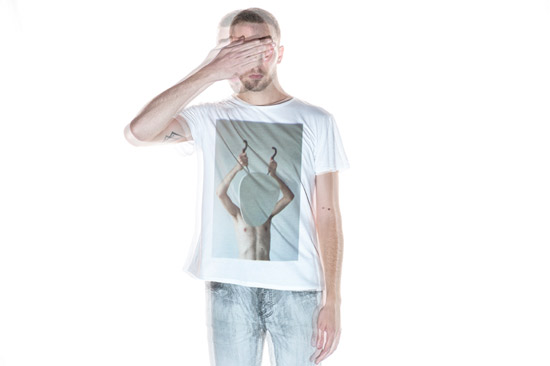 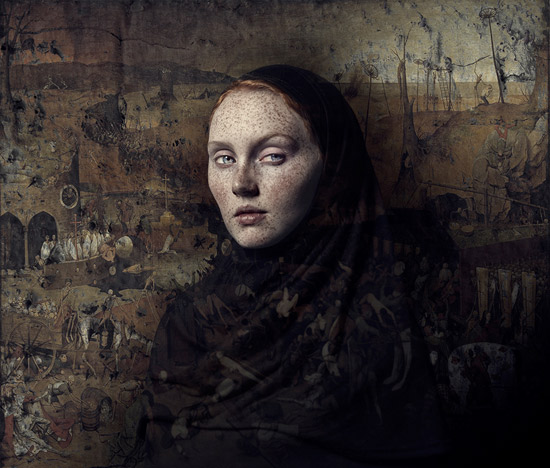 © Bear Kirkpatrick
Disappear with us into the odd, enchanted world of Bear Kirkpatrick.
Bear Kirkpatrick and I bonded, over his portfolio at the PhotoNOLA reviews last December, and thereafter. This is my favourite of his series and the images have grown and grown on me the more I examine them. Playing around in the studio, the photographer found that covering a model's usually visually dominant hair, he could create a wild yet ethereal image.
I'm really pleased to present these portraits in full screen. Prints, they look gorgeous, but I'm particularly loving these back-lit in the mag.
Bear is a poetic, astute and highly amusing sort of chap. In the past, he has gone to great lengths to create his multifaceted imagery; the Wall Portraits were more of a happy accident (and remind me of Yousuf Karsh's story of pulling down the curtains to make his gorgeous portrait of Betty Low.)
Aged 5 Bear was diagnosed as deaf; his hearing was repaired, and he says "I have been transfixed, fascinated, and frightened ever since by things that reveal their power to change shape or that contain multiples within."
I can't really say it anywhere near better than Brian Kubarycz writing on the photographer's website:
"This madness to hazard contact with the wild is constantly acted out in the art of Bear Kirkpatrick. His project is to experience and question what it means not merely to bide time in the worldly state, but far more actively and intimately, to have and to hold an only world, unto death, but in the expectation of new living creatures of awful energies. Kirkpatrick's art, from its first conception to the full arrival of its finished form, explores the ongoing adventure of creation one must take up and sustain in order to inhabit a world of one's own, the sole world worth inhabiting."
View the full screen magazine photography feature.
Magazine | Permalink |
Share 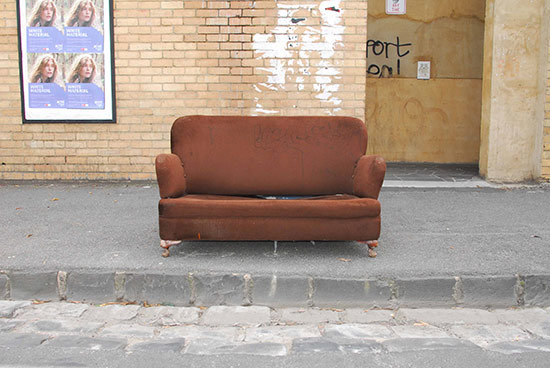 © Paul Batt, "Untitled"
Lots of interesting series on Australian photographer Paul Batt's website, of strange spaces and odd portraits. I especially enjoyed these simple abandoned couches, from 2011. Paul has been widely exhibited and published both in Australia and abroad.
"My primary interest in the 'Abandon Series' is the apparent state of flux and contrast the subjects exist in. These once intimate, comfort giving, interior objects have become surreally out of place, in the exterior world. Although their utilization is over, clues remaining of human habitation in the cushions and armrests formed to unknown bodies, over countless hours. It is this play between the interior and the exterior environments and the traces of human presence to absence that has informed the series as a whole." 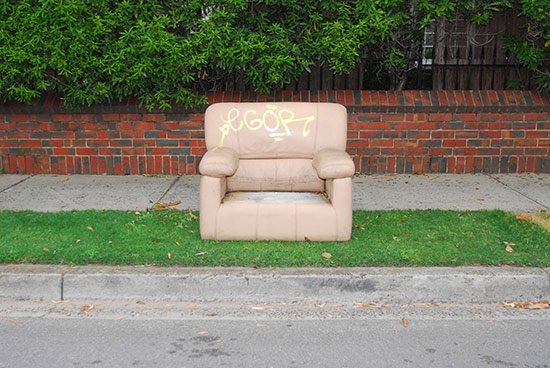 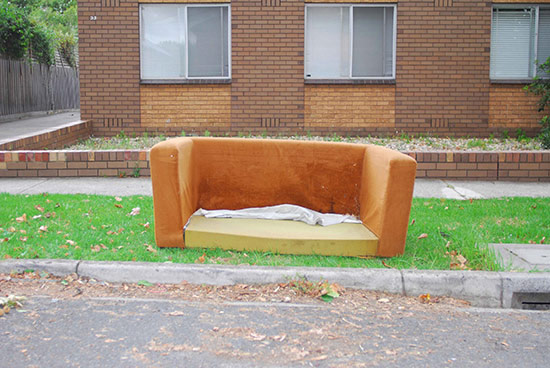 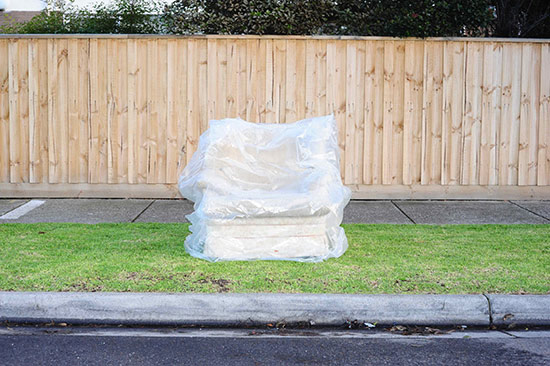 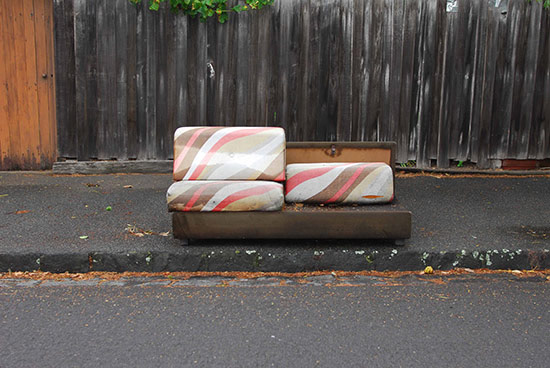 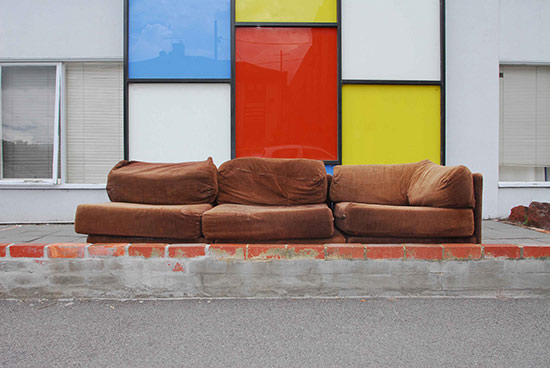