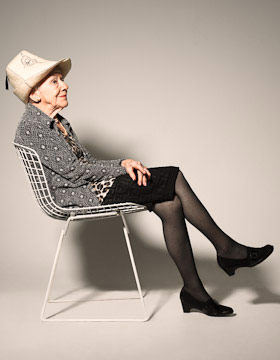 Dylan Coulter's ongoing project 'In The Nineties' was inspired by a photograph he made of his grandfather, age 91. His project is evolving into "an exploration of aging which I find fascinating, particularly since people are living longer in increasingly vital ways." 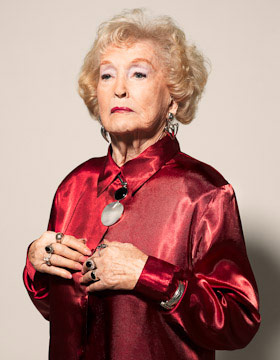 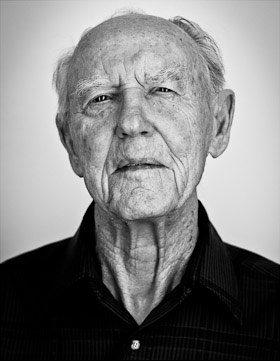 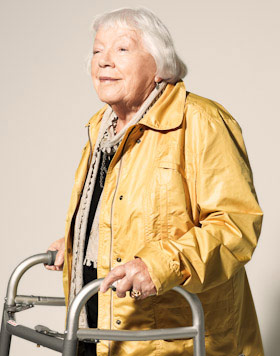 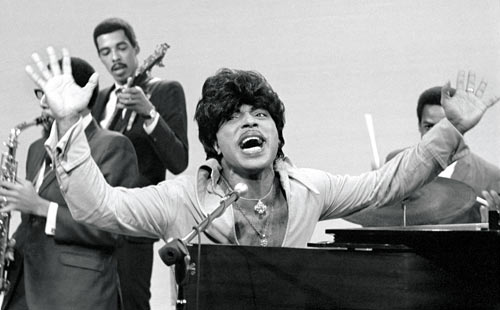 I've worked with Baron "Mixing business with pleasure since 1965" Wolman for almost 20 years now. Baron's iconic photographs graced the earliest years of Rolling Stone magazine, when he was their first shooter. His new autobiographical book, 'Baron Wolman: The Rolling Stone Years' is packed with icons of the 60s and 70s, the stories behind the photographs, and is an honest account of starting out green - "I didn't know what backstage was."

"I hope people spend some time reading the text. We look at pictures and wonder how they came to be. Or we speculate a bit about the life of a photographer, especially one who has been on the front lines, the front lines of any subject, be it music, war, politics, etc. In my book I tried to provide a small window into that photographer's life and offer a few words about the origin of the photos."

"...The other message I got from my days at Rolling Stone, one that I carry with me to this day, is the joy of having an idea and bringing it to reality. It was so wonderful; Jann presented this idea in April of 1967 and not even six months later the idea had turned into a reality as we watched our new baby come off the presses. An idea, Jann's and Ralph (Gleason)'s idea, had now become a reality."

Read lots more in the Rolling Stone Years blog. Buy a premium, signed edition. Buy a regular copy. Buy a T shirt, take a photo wearing it and Baron will put it in the blog. 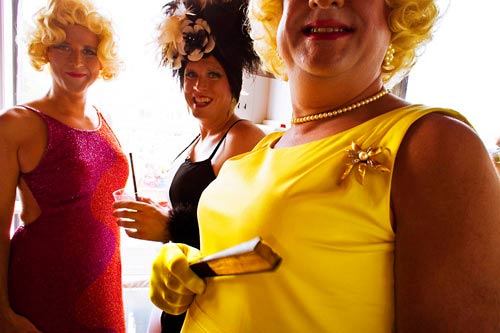 For many New Yorkers, summer isn't summer without a visit to Fire Island, a narrow 30 mile long  stretch of glorious beaches with a mixture of communities organized into hamlets. The Fire Island Invasion, now in its 35th year, is a July 4th event that retells the story of how a drag queen from Cherry Grove, upon being denied service at a bar in the Pines organized a bunch of other queens for an 'invasion'. Zeren Badar took the ferry over this year and recorded some of the fun and games. 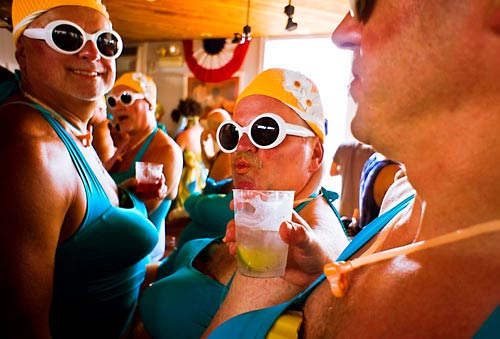 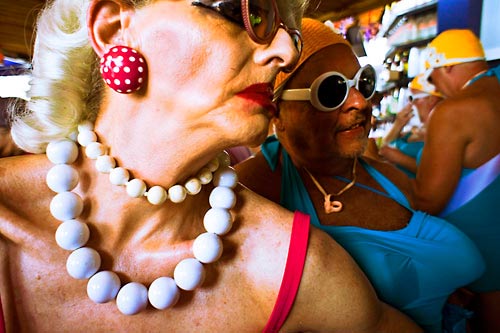 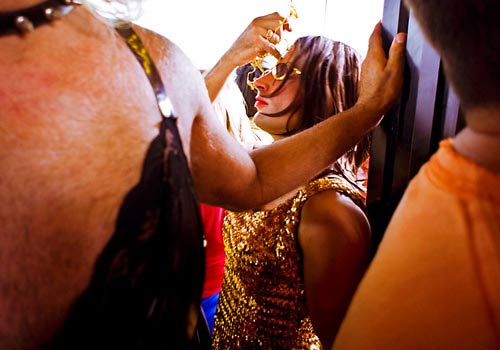 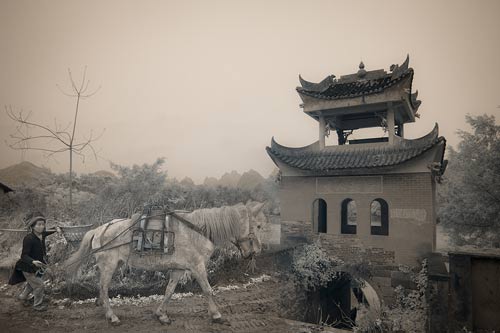 Terri Gold opens her latest exhibition this coming Friday. This chapter in the series 'Still Points in a Turning World' is entitled 'Planet: Into the Mists of Time' and will be shown in conjunction with another artist, Steve Miller. Julie Keyes presents the exhibition at 4 North Main Gallery in Southampton.

"We all lose when ancient skills and visionary wisdom are forgotten. Traditions and rituals are still points, they are our histories and our connections to the past, and they are our future as well. As a 'visual archeologist' I am interested in capturing these last moments of the tapestry of tribal life." 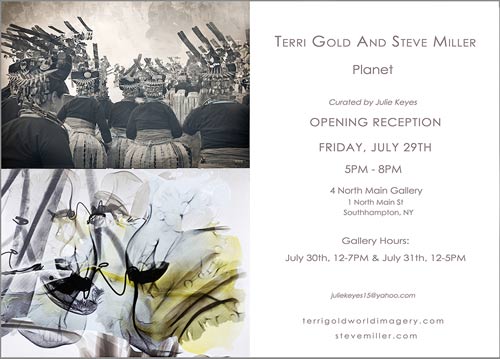 Priya Kambli is an artist and professor currently based in Missouri, whose work has been widely exhibited across the US. This beautiful series was created over the last five years.

"My photographs visually express the notion of transience and split cultural identity caused by the act of migration. I have been viewing this issue through the lens of my own personal history and cultural journey from India to the United States. This journey left me feeling disconnected, unable to anchor myself in any particular cultural framework. I have therefor formed a hybrid identity, a patching together of two cultures within one person. In my work I explore absence, loss and genealogy through the use of my own family snapshots. These personal artifacts are recontextualized alongside fragmented images and staged imagery to reveal the correlations between generations, cultures and memory." 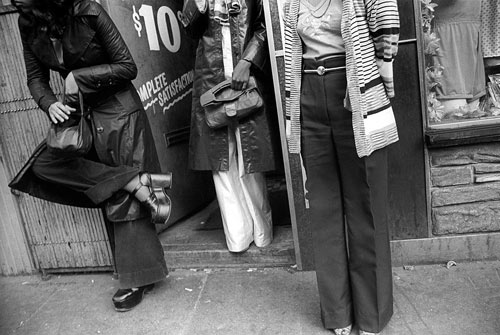 Introduced to me when I was still at the photo agency I ran for many years, Leland Bobbé had a virtually-unseen archive of classic shots from the heyday of CBGB's. Going through his archives recently he came across another cache: long-forgotten photographs of Times Square and the Bowery in the 70s. We collaborated on this, Leland's second aCurator feature (the first was the critically-acclaimed 'Women of Fifth Avenue'), to present a good, graphic selection.

"New York City in the 1970's was a dark, dangerous and gritty place. Before gentrification, neighborhoods had unique personalities; no Starbucks, Duane Reade or Gap every few blocks. Son of Sam, the big blackout, a city on the verge of bankruptcy. Times Square wasn't a playground for Middle America and the Lower East Side didn't look like the Upper East Side. The Bowery was the end of the line for many. Some of these shots were taken shooting from the hip, pre-focused to 6', with a 28mm lens without looking through the viewfinder so I wouldn't be noticed. My intention was to capture the grit and personality of a unique period in New York City history. Long live The Ramones." - Leland Bobbé 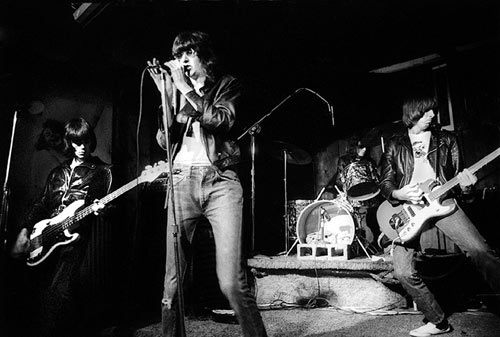 Bottom: "The Ramones on the original small stage at CBGB before they signed their deal with Sire Records. Probably '74." 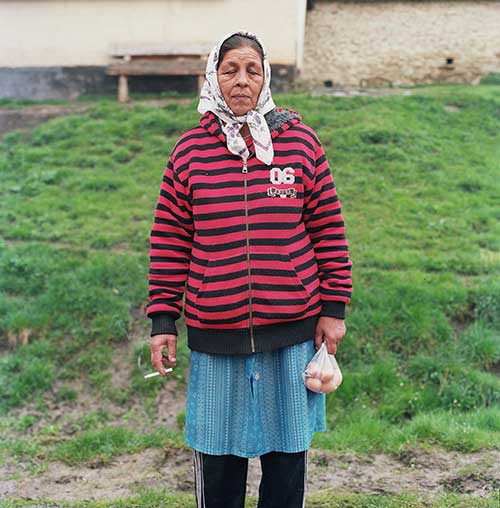 ICP graduate, Barcelona/New York-based photographer and teacher, Lauren Hermele made this noteworthy series whilst on a Fulbright fellowship in Romania last year.

Crit is a village in Transylvania, population 900.

"It took me a few days to get used to the rush hour traffic in Crit. Every morning and evening, the cows and sheep would take over the roads. It was there that I confronted many of the preconceived ideas I had about whether Romania's small agricultural villages were changing since it joined the European Union. For better or worse, I discovered that there was little if no change. Living in Crit is a tightrope walk between extreme beauty and what the locals refer to as "mizerie." Are the villagers prisoners of paradise like one of my colleagues suggested? I'm not sure, but that poignant statement has echoed in my mind louder than I care to admit." 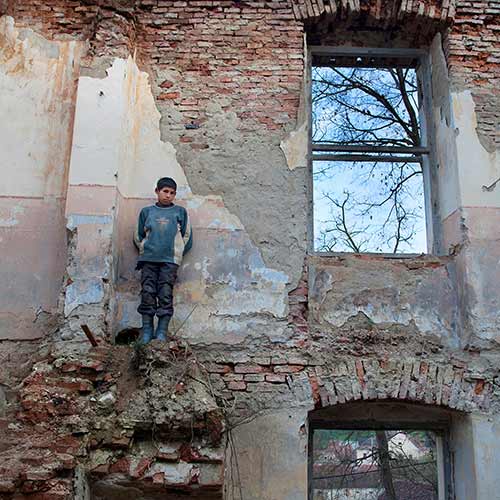 "The majority of the villagers are Roma (Gypsy), but really are just poor Romanians with little in common with the caravan dwelling Roma of popular imagination. Even though Romania joined the European Union in 2007 after being marginalized from Western Europe for so long, little progress has been made. The local schools lack resources and are in poor conditions, alcoholism is prevalent; children start working in the fields and take on adult responsibilities early in life. Malnutrition and illiteracy also weave their way in and out of many households. Like many small villages in rural Romania, within the lyrical chaos and beauty in Crit, there is a structure that is inherently falling apart." 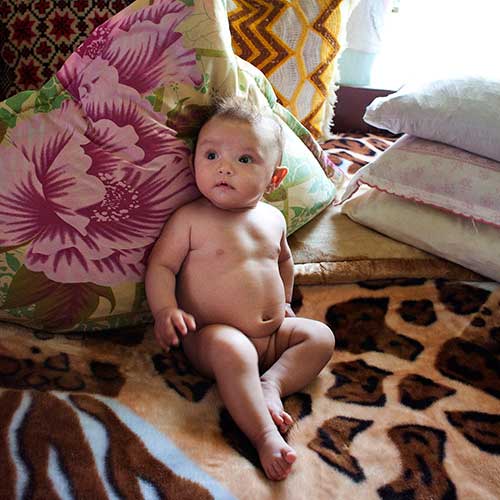 Great stories about Lauren's work on her blog where we find Lauren teaching photography to the kids in Crit. 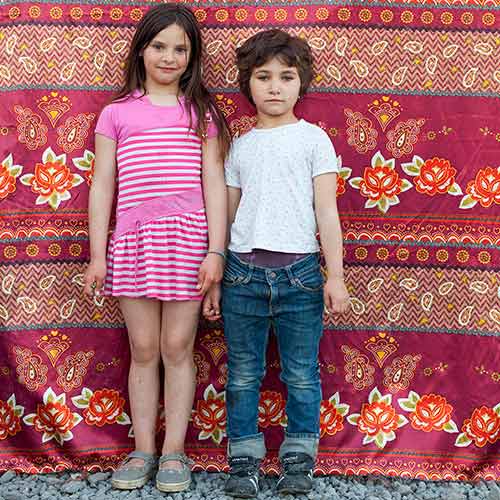 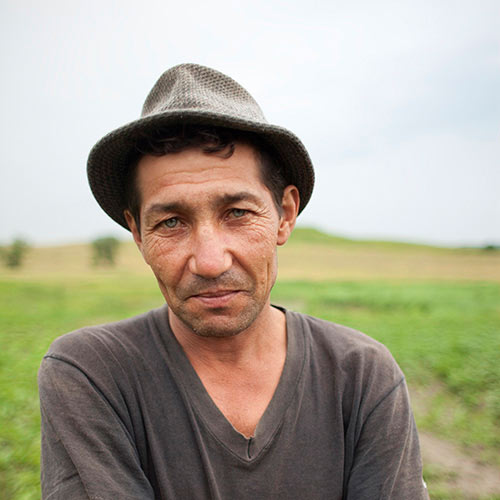 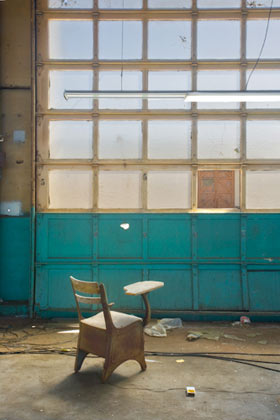 Marco Zecchin's series 'Fort Ord (ret.)' consists of images from the decommissioned Army post near Monterey, California. I'd like to thank him for sharing this story.

"...driving past Fort Ord army base along the Monterey Bay in the late 50's and 60's, I was fascinated by the soldiers moving in convoys, marching in formation, and practicing shooting their rifles along the road we traveled.

In the late '60s and early '70s, approaching draft age, I found this fascination in conflict with my feelings about the Vietnam War and the men who trained there. The protests I witnessed as we drove by... along with the news of the war, confused me. My fascination with the military was confronted with the realities of war.

In the fall of 2005, during an annual reunion of photographic friends of Morley Baer's in Monterey, some of us wandered onto the now decommissioned Fort Ord army base. Walking around the base, my youthful fascination and the stories of military duty and war shared with me by my veteran friends, opened me to the energy of this place: the energy of men training and preparing for war lingers in these barracks." 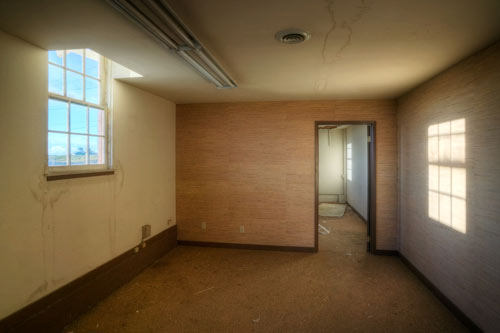 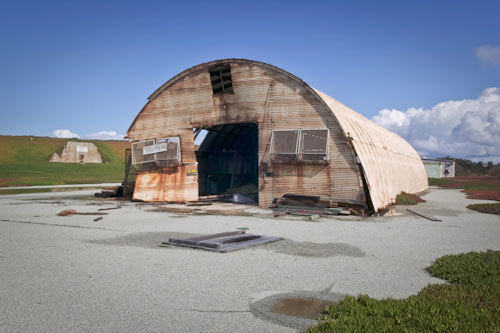 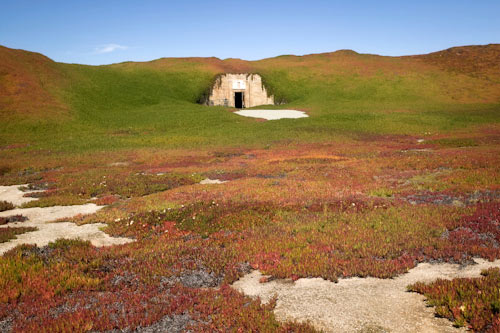 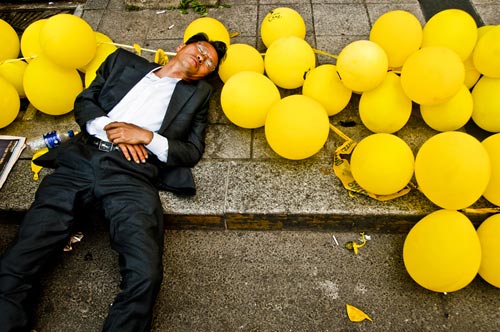 The intro: "aCurator is dope!" 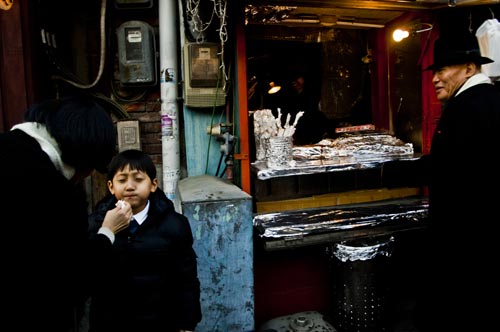 The web bio: "Dayv Mattt was born in Toronto on April 28th, 1977. He is addicted to cursing, simple white dress shirts, and shooting street photography. Dayv is very handsome and currently lives in Seoul with his equally gorgeous wife. They are both ultra-wicked-awesome. There is nothing poignant Dayv wants to say about this photography." 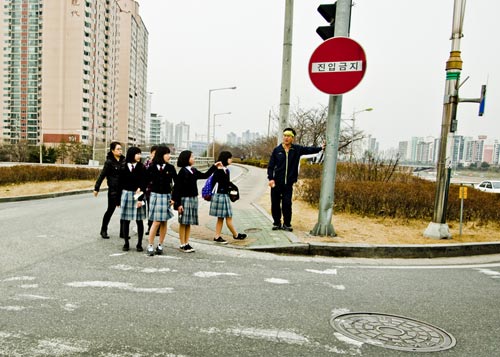 The artist's statement: "What I capture is the essence of Seoul, and many Koreans don't like my photography because they feel that it's too dark, negative, and somber. This is in direct contrast with people outside Korea who have said that my photography of Seoul displays a dynamic and interesting city they never knew existed. Opinions aside, I love shooting street, and will continue doing so regardless of whether I am published, noticed, or respected."
Well, Dayv, aCurator gladly noticed, published and respects you. 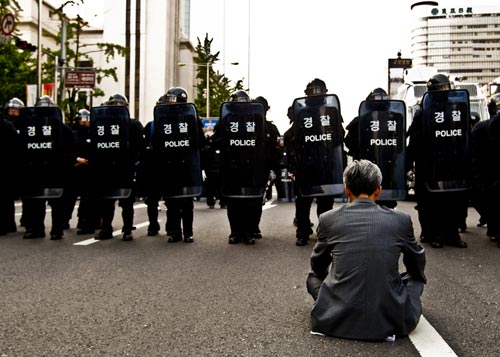 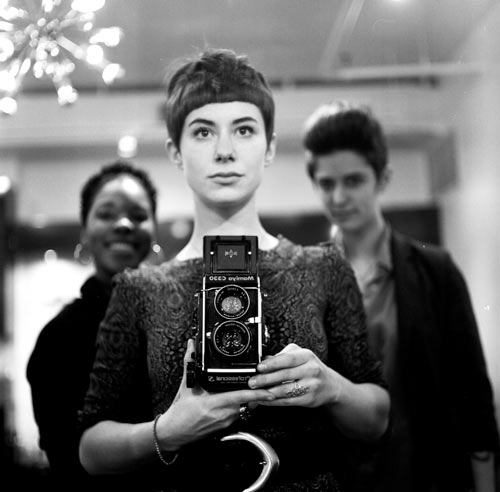 Megan Kathleen McIssac's images are timeless, her writing is unassuming, and her website is good fun. "throughout everything that has happened, i genuinely consider myself lucky and i'm not sure what else to say about it. i discovered a passion for making photographs when i was seven or eight years old and i continue to make ends meet so that i can support my travels and photography and truly live. being stubborn, i only like to shoot film and torture myself by carrying around my heavy mamiya c330 wherever i go, often by foot. currently i'm working on self publishing my first photo-book while contemplating where and how id like to travel to next." 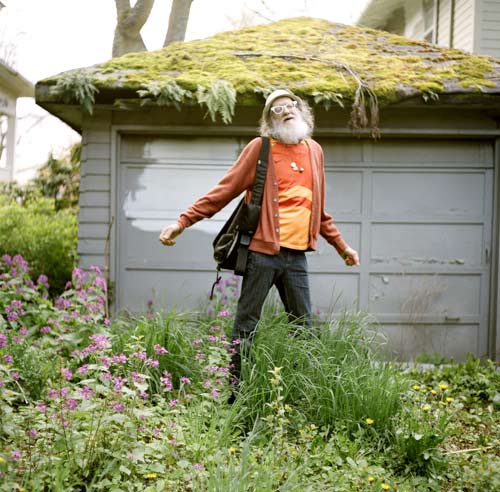 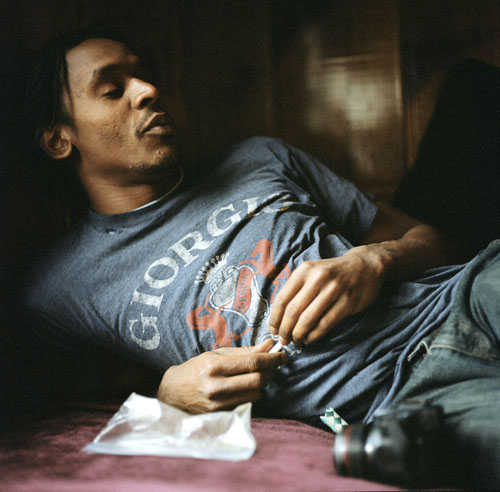