Margaret McCarthy: The Art Of Protest 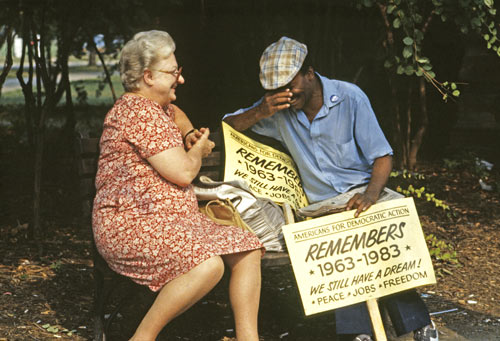 Portfolio reviews are earnest affairs, I've heard them called "stuffy," so it's notable when one finishes one's 10 minutes of speed dating with tears of laughter rolling down one's cheeks which is how it was when I met Margaret McCarthy for the first time and she showed me 'Late Night Animals' - yes, photographs of animals that featured as guests on various late night talk shows. Margaret went on to have a show of the series in New York.

However, it seems as good a time as any for some photographs of protests. As an aside, I hit the streets for my first protest at age 14 under Margaret Thatcher - Meryl Streep won best actress in the Oscars last night for portraying her in a film I wouldn't see even if you promised to keep me in milk for the rest of my life.

So, my alternative title for this story is 'Plus ça change, plus c'est la même chose.'

"The 1980's and 1990's are often portrayed as decades of greed and apathy when social activism vanished. In fact, those times spawned vigorous and committed opposition to a rapidly escalating nuclear arms race and U.S. activities in Central America. A military draft threatened to unfairly target black and inner city youth. Frustration over the treatment of women and same sex couples reached a slow boil as the AIDS crisis hit and abortion rights were continually attacked. We realized the environment was in trouble. A sea change occurred then: the awareness of how all these issues were connected. The cost of war could no longer be separated from issues of racism and poverty; the status of women reflected our relationship to the earth. March events then tended to be multi-issued, asking people to rally around a united consciousness; they cut across lines of race, sex, gender preference, economic status and age.

Color slide film, with its saturated hues, captured the visual richness and drama of these events, as well as the humor and irreverence of their participants. These events were truly 'living theatre' with a message - protest as a creative act. It was important to me to witness and document this pageant of American history not often discussed or acknowledged. Occupy Wall Street was preceded by large-scale demonstrations in opposition to the Iraq War; those were historically connected to the activism of the 1980's and 90's. The anti-war movement of the '60's eventually evolved into a peace movement, which birthed a consciousness of how all the important issues we face are related.

Today a new generation of young activists infuses fresh energy into the peace and social justice movements. I continue to document this multi-cultural, multi-generational activism, hoping to capture its wit, vision, its creative spirit and its fresh sense of urgency.

So what's really changed? (Other than my using digital cameras now?) Look at the jubilant faces of the newly married same sex couples in front of city hall. Look at the in-your-face signs of the young women marching to protect not just abortion rights now, but birth control. Look at the signs from Zuccottti Park; the human mic asks: What is our highest and best future?" - Margaret McCarthy, February, 2012
View the magazine full screen photo feature. 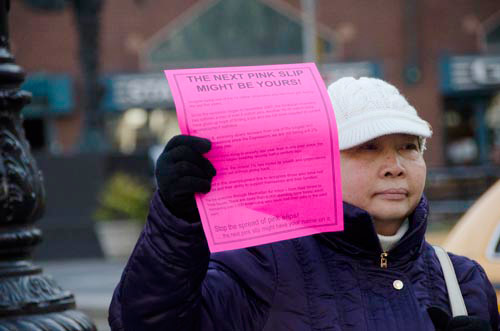 Continuing her work photographing protests, Margaret hit the streets for 'The Line' march today. "5,000 citizens formed a 3 mile line on Broadway, from the Bull at Bowling Green to Union Square and held up pink slips from 8:14 am to 8:28 a.m. today on Super Tuesday, March 6, 2012. It was a protest to represent 14 million Unemployed Americans & demand action from congress & corporations." 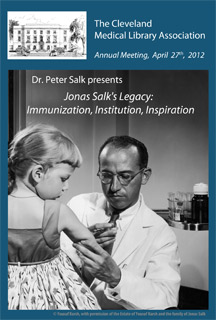 Almost without exception, the business I do for the Estate of Yousuf Karsh brings me great joy and also keeps me grounded.

Dr. Peter Salk and I have been in touch over the past couple of years; we've compared photos of his father, Dr. Jonas Salk, and the Estate happily grants permission for the photographs to be used in various settings. As you can see, Dr. Salk has a lecture coming up on April 27th at Cleveland Medical Library Association.

"Dr. Salk's lecture will explore the broader aspects of his father's legacy and their potential contributions to helping humanity address its present and future challenges and opportunities. Dr. Salk graduated from Harvard University in 1965 and from Johns Hopkins University School of Medicine in 1969. Following two years of training in internal medicine at the University Hospitals of Cleveland, he worked in his father's laboratory at the Salk Institute (1972-1984) conducting research on immunotherapy of cancer, autoimmune disease and strategies for vaccine production. He worked again with his father from 1991-1995 on a project to develop an inactivated HIV vaccine, and subsequently worked on the introduction of AIDS treat- ment programs in Africa and Asia. Since 2009 Dr. Salk has been the President of the Jonas Salk Legacy Foundation."
Karsh | Permalink |
Share 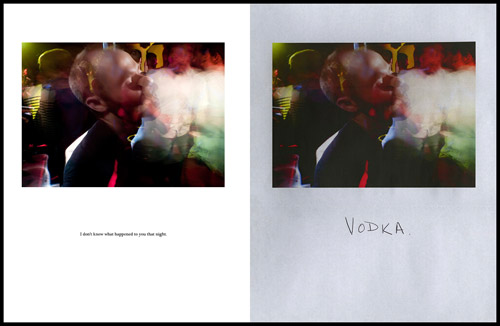 I don't know what happened to you that night / VODKA

Chris Sellas was in the SVA MFA Photo Thesis Exhibit I saw last June. He just got back in touch, telling me my blog post on the exhibition "...kind of helped my work a lot. I landed a second show, and my book sold out in weeks." Hurrah for Chris! Here are a few more from his series 'You. I.' wherein he mails two copies of a photograph to a significant person from his past. He's hand-written on one; the recipient sends back their comment on the other. It really works well as a bigger series so see if you can still get a copy. 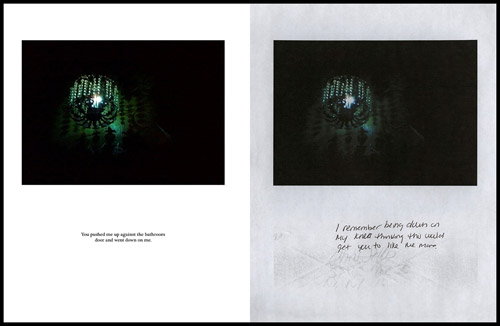 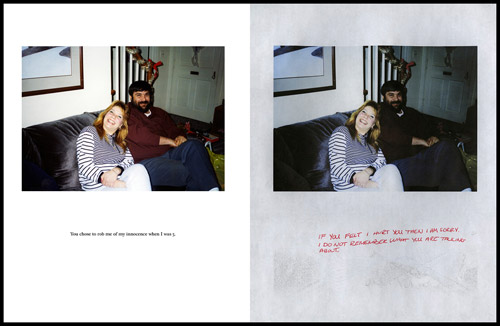 You chose to rob me of my innocence when I was 5 / If you felt I hurt you then I am sorry. I do not remember what you are talking about
Photographers | Permalink |
Share

She Bop A Lula 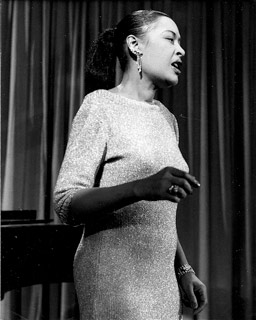 Opening at the Proud Strand Gallery in London on March 7th is a new photo exhibition: She Bop A Lula! The exhibition will feature over 60 fabulous pictures of some of the most successful and creative women singers from the last six decades. From Lady Day to Lady Gaga, the list of artists include not only top chart sellers, but those women who have excited and entertained us with their music and stage performances.

The pictures, all taken by women photographers, are a mix of candid and intimate backstage scenes, sensitive and stylised portraits, through to the excitement and raw power of live performance.

Now you have the opportunity to own one of these fantastic pictures as the prints are available to purchase at £200. All the photographers have generously donated their work for free and 100% of sales will go to Breakthrough Breast Cancer Charity, the UK's leading charity which undertakes vital research into a disease that affects 1 in 8 women.

You will have the opportunity to bid for exclusive prints - signed by some of the artists including the late Amy Winehouse. There are also two specially commissioned artworks of Kate Bush by Dawn Wilsher and Barbra Streisand by Sally Munton for sale. 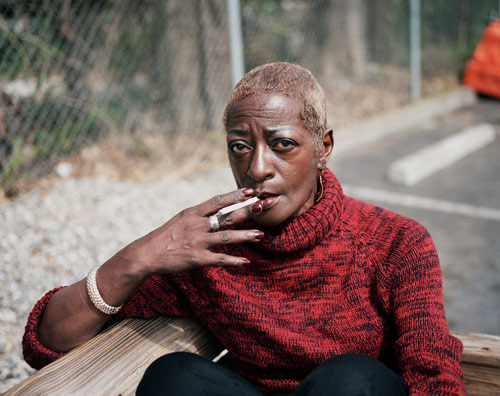 Laura Noel has been photographing the sneaky fag break for several years. I like what she says on her website about this project so I'll leave it to her to expand. Check out her other work, too. When I hear photographers saying they don't know what to shoot, I want to send them to people like Laura. 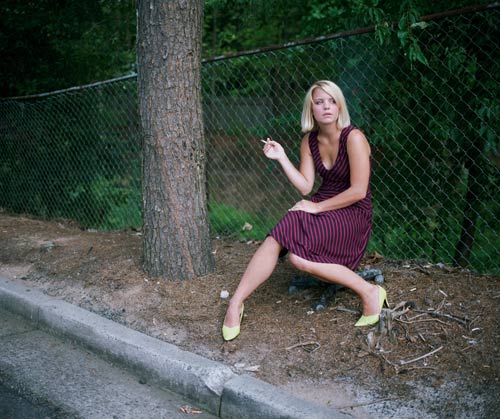 "Though this is a fairly broad subject, I am primarily interested in visualizing the emotions involved in the decision to smoke. I consider these portraits to be psychological in nature, as well as an examination of the places smokers have retreated to. The pull of self-image and addiction is very strong.

My pictures concern the attitudes - defiance, enjoyment, resignation, and contentment - of those who continue to smoke cigarettes in the face of public disapproval. More importantly, these portraits reveal that for some smokers, cigarettes are a way to enter into a state of contemplation.

This introspective pause in a hectic world is more valuable to smokers than non-smokers would imagine." 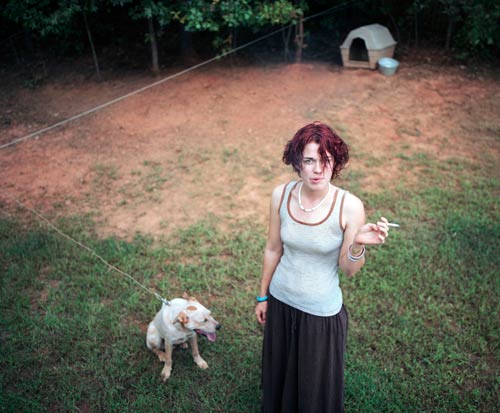 "A residue of glamour can also be seen in these photographs - the theatrical inhaling and exhaling, the sensual pleasure of watching smoke float and dissipate in the air, and the primal tie to fire. Though we may not approve of the act, we can understand the appeal of smoking, however false it may turn out to be.

Since the anti-smoking movement began gaining momentum in the 1970's, culminating in the current ban on public consumption, smokers have become social refugees banished to windy corners, cars, and private rooms. I am interested in exploring the idea that society has become so disenchanted with smokers, that we have tried to legislate them out of existence." 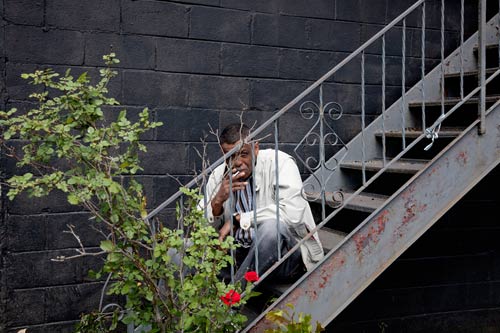 "Of course, smoking is unhealthy and potentially fatal, but my images are not a defense of this dangerous practice, but instead a portrait of a diverse group of people united by a habit." 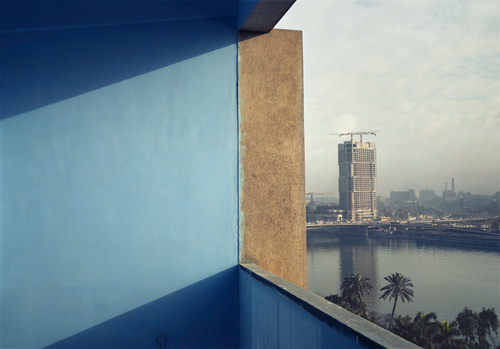 Gitterman Gallery will host their first exhibition with Adam Bartos, opening March 1st and showing never before exhibited color photographs. The exhibition includes work he made in North and East Africa and Mexico in the early 1980s and recent photographs made in Long Island, New York between 2007-2010. The spiel:

"Bartos' interest in the 19th century travel work of Samuel Bourne, Robert MacPherson, and others, led him to Egypt, Kenya, and Mexico with a large format camera and color film. His images are thoroughly modern, yet their energy is inspired by the lucid depiction of form and light that the earlier photographers achieved. The same impulse is present in his recent work, although the subject matter is found much closer to home, in eastern Long Island. These images have been printed using a four-color carbon transfer process that, with its tonal range and description of fine detail, emphasizes Bartos' subtle color palette and formal compositions."

Thanks to Kate Greenberg for tip top PR stuff. 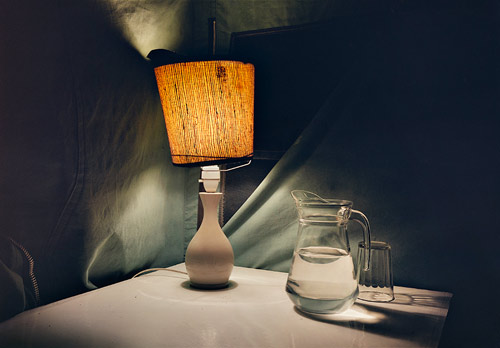 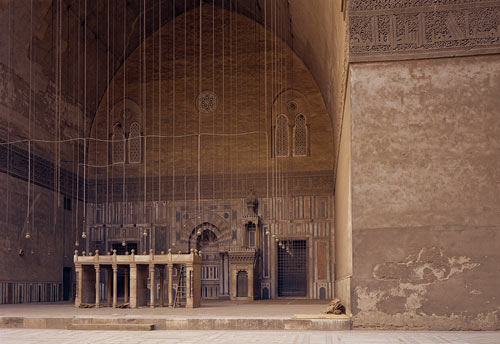 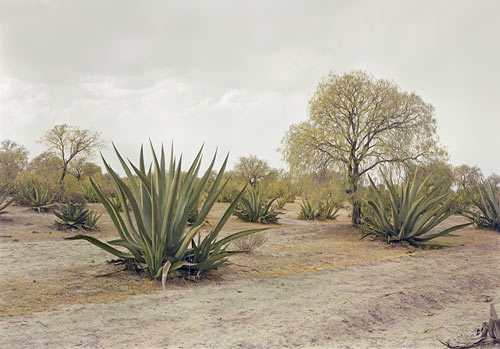 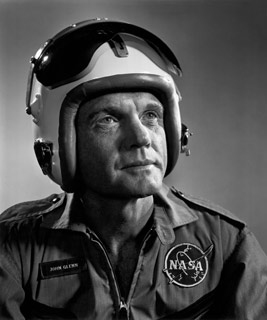 I hope to live long enough and have enough money to take a trip myself, Virgin Galactic or otherwise.


I find it almost impossible to imagine this great nation so forward-looking as I watch the desperate attempts by the right to roll back progress. 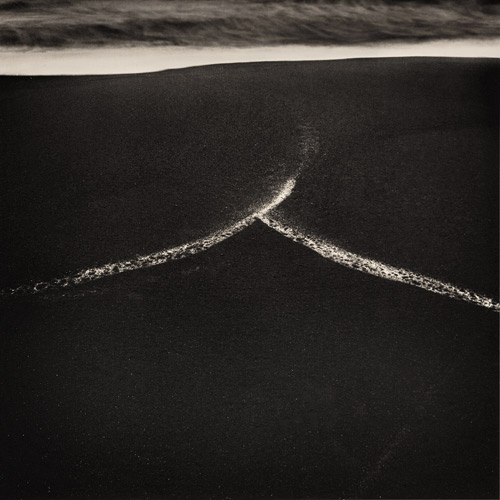 Bill Schwab and I first crossed paths many years ago when he joined my agency for syndication. I recall some photos of Dee Dee Ramone. The wonderful world of social media brought our paths together again recently and I learned about the other Bill Schwab, who, with a Kodak Brownie and a home darkroom kit received as a gift from his father, taught himself to process film and contact print at age twelve: a widely exhibited and collected fine art photographer, wet plate practitioner and teacher, and producer of stunning landscapes. Bill has made several trips to Iceland and takes workshops out there (one of which 'Iceland: The South Coast' is later this year); his work also often centers around his home base of the Detroit area.

Bill's book 'Gathering Calm' is available in its second edition, and his next book, featuring his work from Belle Isle, Detroit, will be released this year. 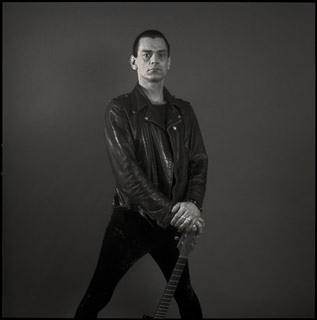 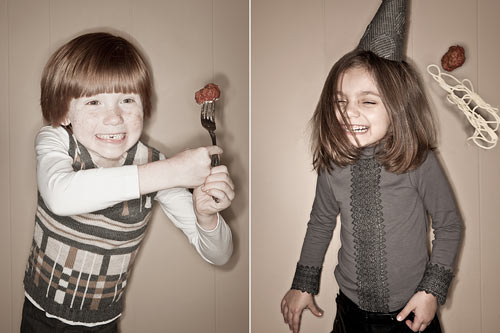 Christopher Auger-Domínguez makes photographs of kids that I actually enjoy looking at. At a recent portfolio review it was a real pleasure to see Christopher again; his demeanour is reflected in his photos. 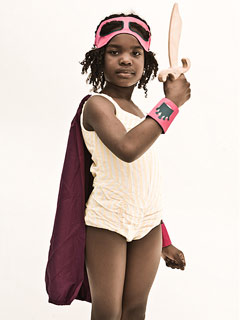 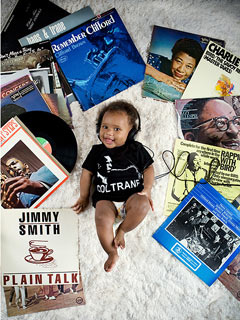 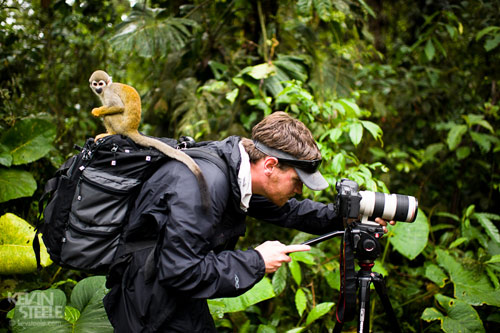