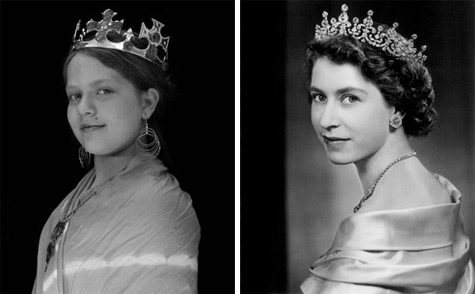 We would like to congratulate teachers Jennifer Grimm, Lydia Hardacre and Darren Vaast of Glendale School, Calgary, on the completion of their brilliant Karsh project. Each of the Grade 5 and 6 students recreated a Karsh portrait and also made a documentary style movie based on the person they each chose.

"This project really came about through serendipity and involved a wistful desire to go to the Glenbow Museum and a chance look at the upcoming shows to discover that a Yousuf Karsh exhibition was coming to Calgary. After an innocent email asking for permission to use Karsh portraits as inspirations, we had our final photography assignment!"

After learning about Mr Karsh's history, the students referenced dozens of portraits including Mandela, Hemingway, Schweitzer, Warhol, Hepburn, Keller, Cousteau and Bogart, researching their subjects and recreating the original photograph.

Click through to 'Finished Products' to enjoy the complete set of images and videos - you might even learn a thing or two! Nothing I did at school came close to being this cool! 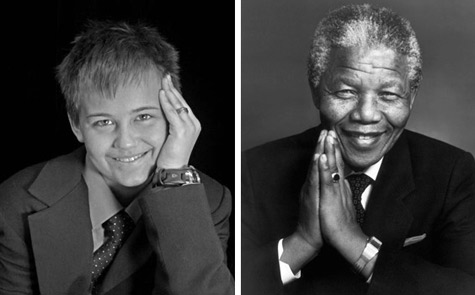 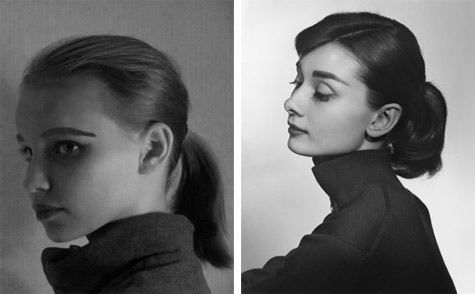 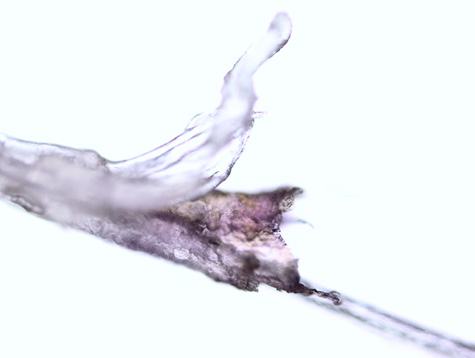 Welcome to Aoife O'Donnell's minuscule yet magnificent world. aCurator is fascinated by these photomicrographs.

"Art and science are moving towards each other, enabling both disciplines to discover common issues and methods. Once-clear divisions are no longer reliably separate, prompting this project to represent the potential for an increasing overlap of interests. While the outcome of studies in art and science often differs, the creative imaginative processes are similar.

Micro Portraits falls under what has been deemed the genre sci-art which seeks to locate connections between the arts and science through borrowed methods and collaborations. It is the result of an interdisciplinary collaboration between the photographer and Fergus Ryan, professor of biology at the Dublin Institute of Technology. The project is concerned with alternative imaging techniques used in laboratories and the element of non-human intervention in creating imagery. The photographer is using microscopes to record images of cells, tissue, DNA and various other effluvia from her family and herself.

Removed from their usual context of the laboratory, these new genetic portraits seek to interrupt the traditional notion of the family portrait in photography prompting the viewer to consider the transformations and changes occurring inside the body on a cellular level,and questions when the alternative portrait produced by scientific imaging moves from the generic to the personal. The photographer provides a privileged opportunity for the viewer to get up close and personal with elements of the body which may previously have eluded recognition."

Aoife O'Donnell is an Irish visual artist based in New York City, who specializes in photomicrography. O'Donnell completed a B.A. in photography at the Dublin Institute of Technology and has previously studied at Columbia College Chicago during 2008. Upon graduating she was awarded the Dublin Institute of Technology Medal for exceptional performance. Having exhibited her current body of work entitled Micro Portraits at the Gallery of Photography, she was selected to exhibit at the Photo Ireland Festival and at RUA RED's summer exhibition 2010. Her work has also been exhibited at Filmbase, The Joinery, The Back Loft, The Homeless Gallery and The Complex. It has been reviewed in the Irish Arts Review autumn edition 2010. O'Donnell has contributed to various companies including Merc London, Red Stripe UK and Starchild Chicago. She currently divides her time working at Griffin Editions, The International Center of Photography and Rick Wester Fine Art. Micro Portraits will be exhibited at Raandesk Gallery, New York City in October 2011. 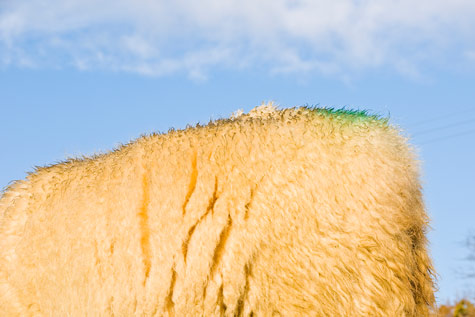 Miriam O'Connor is my latest crush. Her submission of 'Attention Seekers' filled me with joy; it's refreshing, smart and humorous. I think her statement outlines this project best, but I will say to go to her website because each category is a gift in its own right. Relatively young still, Miriam's been exhibited in her hometown of Dublin and elsewhere in Europe. I hope she continues to get the exposure she deserves.

"In this work O' Connor's approach is best surmised as being concerned with the representation of scenes which appear to 'petition for attention'... Each of the scenes, while executed with a formal exactitude, exhibit ambiguous clues and mischievous impressions, where the interplay of color, form and sequencing are all-important signifiers in engaging with the series." 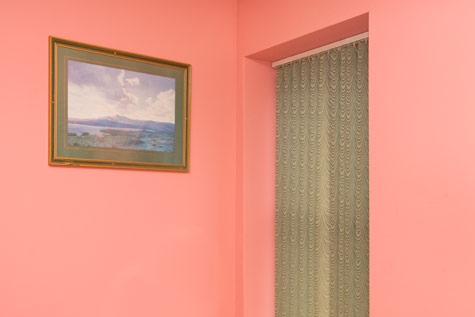 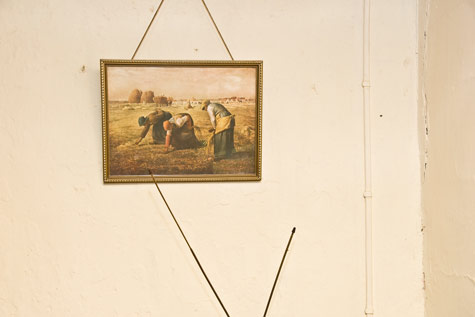 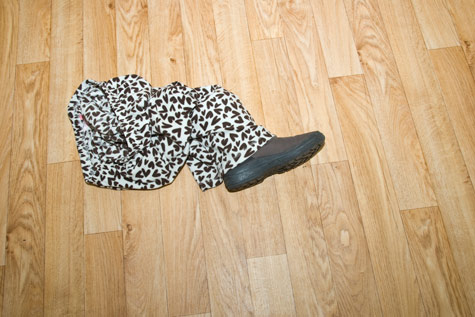 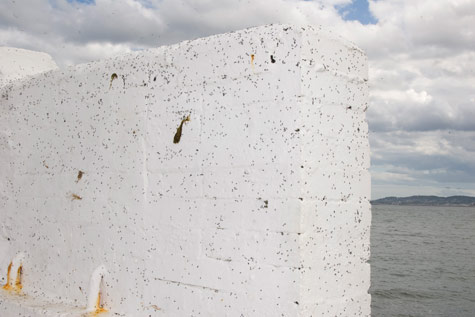 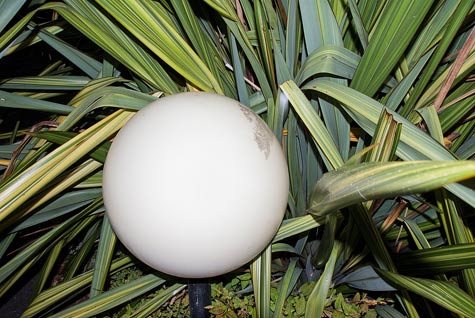 Coming soon is one of the best books you'll buy this year, Baron Wolman's Every Picture Tells A Story: The Rolling Stone Years. In case you don't know, Baron was Rolling Stone magazine's first photographer and photographed every cool and groovy musician at the time, Jimi, Janis, Jim, Jerry et al.

Whilst we prep for the release of the book, Baron will be nipping over to Moscow for the opening of his solo show at Pobeda Gallery. Head on over to the Red October Chocolate Factory!
Exhibitions | Permalink |
Share 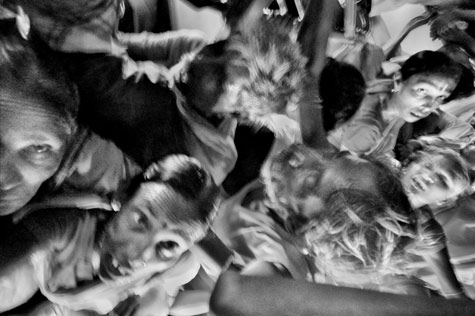 Stifling, claustrophobic, oppressive, sweltering. I'm not talking about the tube's airless Circle Line or the subway's over-conditioned L train in rush hour but the unreserved general compartments of Indian Railways.

Kolkata-based Ronny Sen has worked for publications in both India and abroad. His works have been published and exhibited in many countries. Since 2006 he has been awarded by the Sony World Photography Awards, National Geographic Magazine, Shoot nations by the UN, Powerhouse, The Forward Thinking Museum, and The Lonely Planet Magazine. Presently, he is working on his long term project 'Documenting Death' which revolves around people who are dying.

Ronny waxes lyrical about this work-in-progress:

The apparition of these faces in the crowd,
Petals on a wet, black bough.
- In a Station of the Metro.

...unforgettable as an expression of a poetic experience of the highest order. The inexorable spell of these two lines by Ezra Pound weighs upon me whenever I catch sight of a typically Indian scene crammed with people. The lines recycle themselves into visuals as I scratch around for the right frame to showcase my perception of the Indian reality. Particularly when my camera chances upon the mess one finds so frequently in the unreserved general compartments of a railway carriage.

It is needless to remind ourselves that the lines have nothing characteristically Indian about them. Ostensibly, though, they depict the crowd in a station of the Metro. The pen-picture of the 'Petals on a wet, black bough' speaks clearly of a different clime. 'The apparition of these faces in the crowd' of the first line, on the other hand, keeps haunting you even as you try to escape.

Travel the length of the country. Board a train, thrust your way through the crowd to some messy corner of a general compartment and you start loosing your identity. One can safely predict a traumatic journey to the destination of absolute facelessness.

What the series seeks to capture is the chaos of a sick, thick throng gasping of air. It takes you straight into the heart of the muddle and the mess. It makes you listen to the muffled voice of individuality.

Ruthlessly robbed of your right to breathe, you are already there, sharing with the hapless masses the unbearable tightness of being---bearing with them the full burden of an inescapable Indian experience. 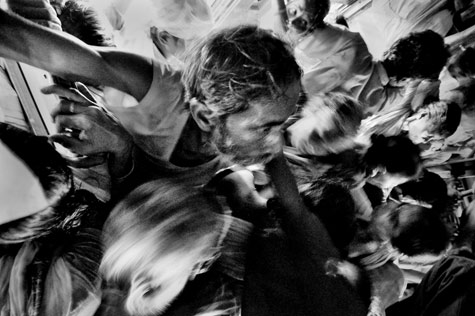 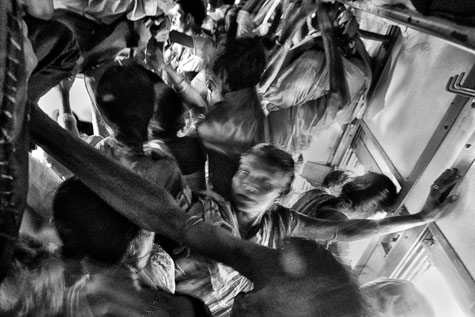 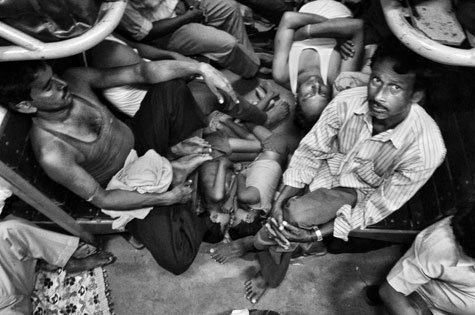 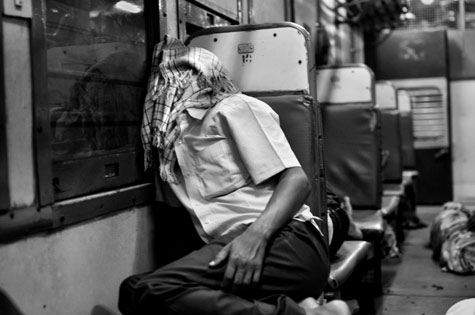 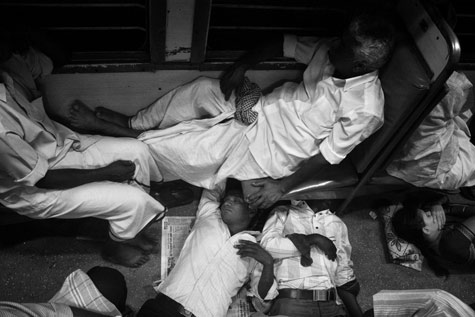 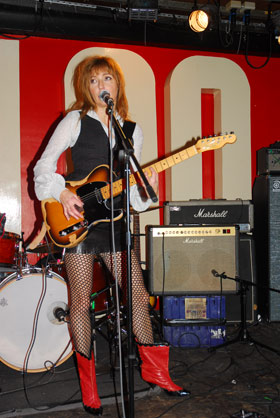 Erica Echenberg is a name I knew from the little stickers we used to use on slides back in the 80s and 90s* - my agency repped her extensive archive in the US - and I only just met her in person recently. We will be working together over the coming months along with another important woman in the industry, Dede Millar, ex-Director of the Redferns picture library, on an exciting new project. Details will follow but in the meantime, having read and shared Viv Goldman's article in the Village Voice about Poly Styrene and other influential women in music Erica sent me a couple of recent shots of Viv Albertine, formerly of The Slits.

"The gig was at the 100 club in Oxford Street, and Viv Albertine was supporting Glen Matlock of the Sex Pistols. Viv... does a solo 30 minute set of quirky, sometimes amusing and very memorable acoustic-guitar backed songs about love, sex and boys. It's the same set that went down so well at the Rich Kids' reunion at the start of the year, and with the venue quickly filling for the main event she gets a great reception from the crowd." - Erica

Walt Stricklin: Made in China

With a somewhat long and multifarious background in photography, including being a 1982 Pulitzer finalist, a DP, and an educator, Walt Stricklin submitted his 'Made in China' series knowing that the full screen format of aCurator would do the images great justice.*

In 2010 Walt took an opportunity to travel to Inner Mongolia, attend the inaugural photo festival and enjoy the photo opp - favouring panoramic format he says "I want to go beyond the edge of the frame of my camera. The problem I had with most panoramas I had seen was their homogenized, static, and lifeless. I want my pictures to have context, a sense of place and most important, my vision of the scene." - and the results are some glorious 'Scapes.

"I have been working seriously in composite panorama landscapes since 2008. I love the freedom it allows me to open my vision and shoot pictures that are not possible any other way. I have tried to carry it beyond the traditional landscapes and make them a blend of reality and my interpretation of any given situation.

These images are from a recent visit to Xiang Sha Wan (a tourist destination in the Gobi), Inner Mongolia, China. I was one of 10 American Landscape photographers invited to participate in an exhibition for the inaugural photo conference presented by Photo China magazine."


*And, it does! In fact, this particular series would look very impressive on the largest monitor you can find at your local Apple Store. Go ahead, pull up aCurator, and bring some full screen eye candy to your fellow shoppers! 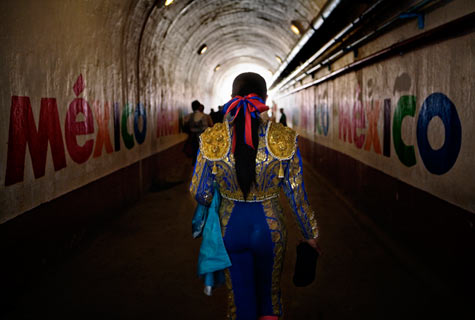 Gina LeVay has always impressed me, ever since as a youngster she tipped up in my office with a bunch of contact sheets of Morgan Spurlock around the time of 'Super Size Me'. Gina has gamely tackled New York City's underground Sandhogs, the guys who drilled our city's water tunnel (featured in the launch of aCurator magazine) and is working on her (sadly, ongoing) 'American Widow Project'.

Her latest exhibition is from the project on female bull fighters she executed in Spain and Mexico over the past 5 years, portraying elegance in a brutal circus. "I was curious to meet the few tenacious young women who have upended centuries of tradition by penetrating the antiquated, machismo world of bullfighting."

More info at Hous Projects, where the exhibition opens on May 5th and runs through June 25th.

I'm squeamish, so I chose a few images that do not show any pierced flesh. 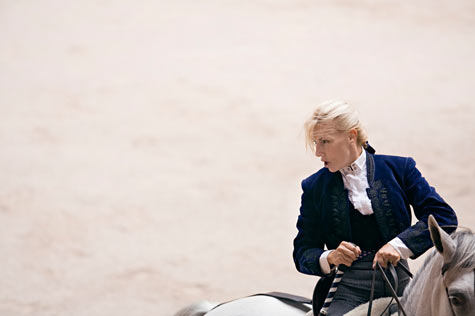 I had the pleasure of meeting the artist Anne Arden McDonald at a solo exhibition in Brooklyn recently. Anne works in a really wide range of media, including photographic prints that she makes both with and without cameras. The recent installation includes prints measuring up to 90" in some cases along with smaller prints that feature details. In intricate processes Anne makes contacts prints using various objects, bleaching and manipulating the resulting prints (in one case, painted with "medicines, spices and household cleaners").

As a person with almost no patience I am fascinated and in awe of Anne's work. Here are just a couple of examples of her photography and there are more series on her website.

Fragility, 2011, 126 x 50 ins.
Contact print of a pile of layers of glass and eggshells, exposed with a flashlight 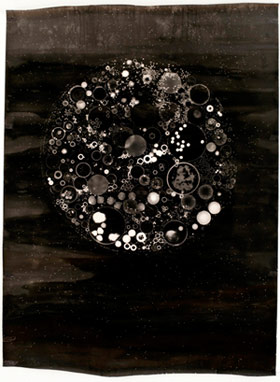 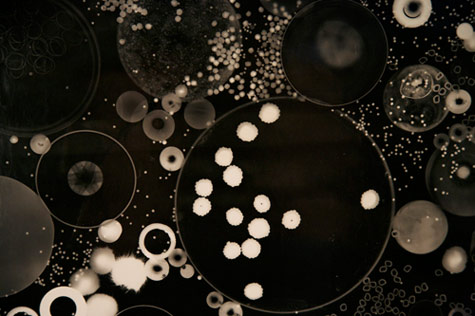 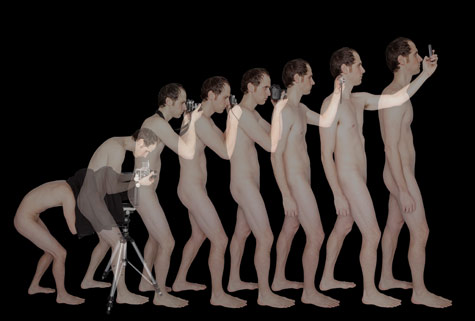 Talk about stumbling upon... I was asked to answer some questions for the Parsons School of Design MFA Photography Catalog and whilst browsing last year's I saw this and just had to post it.

Bobby Davison has some most intriguing work on his website, Untitled Proof, that you need to check out.