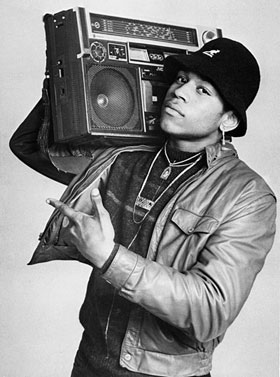 Opening at Project Space in Los Angeles this Thursday, August 12th, is a new exhibition of the work of aCurator favourite Janette Beckman, curated by Jen DiSisto of Art Duet.

"Janette Beckman's photography exhibition marks the third artist installment at Project Space. Beckman culls works from her time in London during the punk era through the hip-hop decade in New York and Los Angeles. The show will feature artifacts and photographs of musicians, their fans and youth culture." 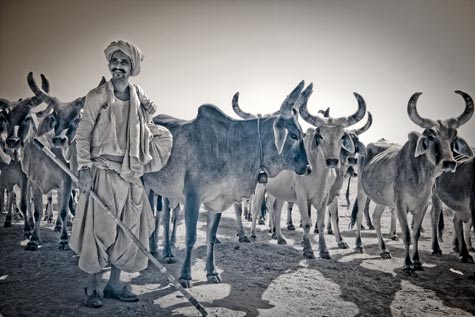 "My ongoing body of work, 'Still Points in a Turning World', explores our universal cross-cultural truths: the importance of family, community, ritual and the amazing diversity of its expression.

My earliest memories are of spinning a globe, always drawn to the last mysterious corners of the world. Photographing the people, festivals and sacred sites in the tribal areas of Asia, my passion is to visually capture the rituals that define our lives and to create images that explore our human connections as they are formed. This series is from my travels in the Winter of 2010 to Southern Rajasthan & Gujarat exploring the tribal cultures of the Rabaris, Garasias, Bhils, Wadha and the reclusive Jats. Highlights of the trip were visiting villages where the traditions of different millennia co-exist side by side and the Baneshwar Mela where the tribal Bhil women performed early morning bathing rituals.

My work is interpretive in nature. The photograph is the first step in the process. My technique often involves creating imagery using the invisible infrared light spectrum. I shot infrared film for many years. Now, I use a digital camera converted to infrared and the digital darkroom to create the split-toned imagery. It adds an element of mystery when creating the work, which, I feel, suits the subject matter and the timeless quality of the images.

The differences between our many world cultures are fading away. We all lose when ancient skills and visionary wisdom are forgotten. As a 'visual archeologist', photography has become my way to honor and celebrate an existence that may soon vanish and what it is that makes a people unique. I believe that sharing these stories and rituals can have a positive impact by providing a window on our common humanity." - Terri Gold, July 2010 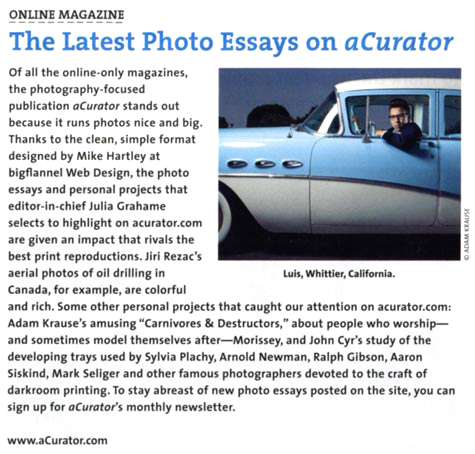 Thanks to Amber Terranova for choosing aCurator as Photo District News' Online Magazine Pick of the Month, August 2010. Jason Florio has the gorgeous cover feature. 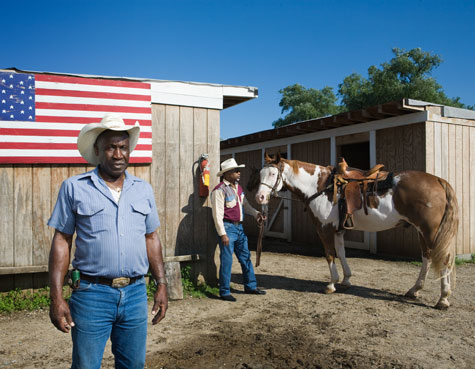 "I stumbled upon this a few summers ago while driving out to the beach, taking the back roads through Brooklyn. As I sped down the Highway I thought I caught a glimpse of these two black cowboys, trotting out on the grassy strip alongside the road. I was going too fast to get a good look, and there was nowhere to turn around but I went back a few days later, and found this unbelievable place. It's a few acres of land which consists of horse stables (they have about 30-40 horses that live there year round), a riding ring, a bunch of junked up trailers, a clubhouse (which was shut down by the DOB last I saw), and a large grassy area. The people I met there were very welcoming, mostly of an older generation, mostly from the south, and consider themselves real cowboys.
The place is really special because it's nothing like New York City, yet it's really buried deep in the boroughs - right by East New York, Howard Beach, and Ozone Park. But when you're standing there, you really feel like you could be in South Carolina or some far off place." - Dennis Kleiman, July 2010
"The Federation of Black Cowboys was created in 1994 by a group of diverse people looking to share and promote knowledge of the 'Black West'. Seeking to create greater understanding of African American culture and heritage, we endeavor to provide educational opportunities for the young public of New York."
View the magazine photo feature.
© Dennis Kleiman
Magazine | Permalink |
Share 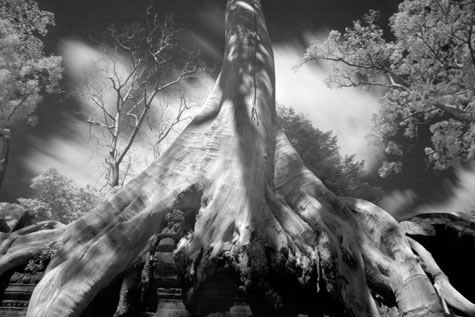 "I became fascinated by the life-and-death survival struggle of the trees of Angkor and the ancient temples upon which they grow. I used infrared filters and slow shutter speeds to capture the otherworldly light and power of the trees." - Viviane Moos.
The temples of Angkor were built by the Khmer civilization between 802 and 1220 AD. From Angkor the Khmer kings ruled over a vast domain that reached from Vietnam to China to the Bay of Bengal. More than 100 stone temples survive. Angkor Wat, built during the early years of the 12th century honors the Hindu god Vishnu and is a symbolic representation of Hindu cosmology.
View the magazine photo feature. 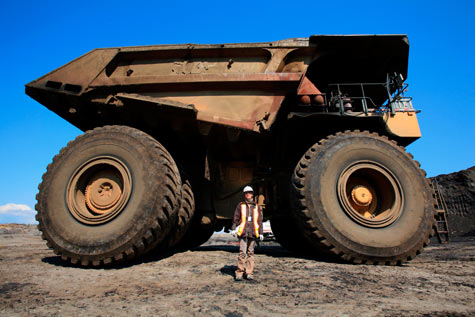 "I first came across the Alberta tar sands on assignment for WWF in 2007 and again in 2009 on several trips on behalf of Greenpeace. My first impression of the industry in northern Alberta was one of grandiose developments, in a negative sense of the word. Mining and energy extraction are never pretty, but the scale and pace at which big oil is operating in Canada is truly staggering. How could it be that Canada, widely regarded as a friendly, environmentally conscious and 'nice' country condones such destructive projects in its own backyard?

One answer I found whilst talking to people was cultural: whilst most Europeans, and indeed many peoples around the globe live with a notion of resource scarcity, Canadians apparently take the opposite approach: abundance. The mining pits, steam and upgrader plants north of Fort McMurray are truly gigantic, the impression of a stinking moonscape poisoned with toxic tailings and the sounds of cannons designed to scare off migratory birds apparent to anyone who ventures half an hour north along Highway 63. How on earth would anyone in their right mind condone this doomsday scenario?

Apparently, Canada has plenty of it all, and wasting an estimated 10% of its boreal forest, one of the last prime forests left on the planet, is not an issue. In my own cynical mind, this scene would have not surprised me if it had been in say Nigeria, Azerbaijan, Kazakstan, Bangladesh or any other place governed by big oil - I have seen similar sights in other parts of the world - but to witness this in the First World, where one would assume the existence of a functional society with a healthy respect for civil rights, for its environment and its people, was humbling.

You can take a view on the destruction of the land, the size and scale of things to come in the next decades - the projects already designed, approved and underway will occupy an area the size of Florida. However, the province of Alberta alone is roughly equivalent to the size of France: if you take off from Calgary, you'll fly for at least two hours before reaching Fort McMurray, the epicentre of oil development, and you're still in Alberta. To sacrifice a proportion of that for petrodollars, jobs and prosperity is an obvious and well-rehearsed choice seen the world over.

However, what got me most is the blatant disregard for the people living downstream from this deadly industry: Canada's First Nations. Gentle, soft-spoken, patient, suffering, yet by and large indecisive, they are the true losers here. Several communities living along Lake Athabasca have been ravaged by cancers unheard of before oil developments began on a large scale. Their water is not safe to drink; the numbers of fish, migratory birds, moose, bear and other wildlife have shrunk and are no longer safe to eat; their ancient way of life seems to be over for good. I find it hard to accept and reconcile this with the notion of the democratic, First World government that Canada claims to have - this scenario feels more at home in the darkest periods of colonization many of us have hoped were condemned to a chapter in the history books.

I hope that the images I present will give you a notion of how alive that history still is today."
- Jiri Rezac, July 2010 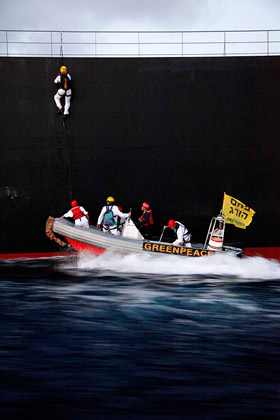 Jiri Rezac proposed his tar sands story to me shortly after the magazine launched, from London where he's based, and it was obvious the story would make a fascinating full screen photo feature. We met for coffee in New York during a brief pause in his schedule and nattered for as long as we could. He was shooting a green technology project in Mumbai, Shanghai and Hong Kong and about to nip off to Brooklyn for a portrait. Since we met, I've realized how little I know, and how little I do. Jiri has barely been at home and I was wide-eyed learning that he was off on the Rainbow Warrior for two weeks with Greenpeace. He's a workhorse, and a really sweet and humble man.

"In the spirit of the current world cup fever, my good friends at Greenpeace scored the first goal this morning by stopping a coal shipment into Israel. Boarding the 290 metre long Orient Venus at the crack of dawn, the operation went smooth as clockwork: three activists were on board within minutes, and pictures travelled to the world's media without a hitch in time for the breakfast news in Europe. Life could hardly be better here on board the Rainbow Warrior right now..." Jiri Rezac, July 8, 2010 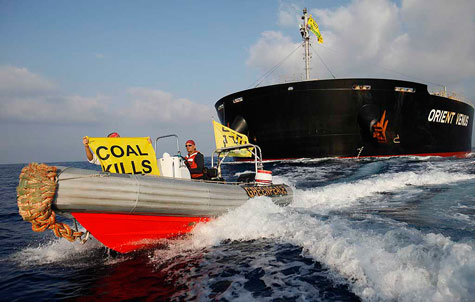 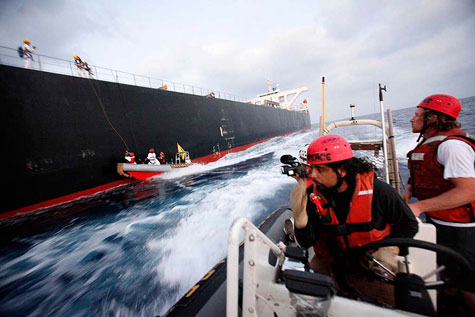 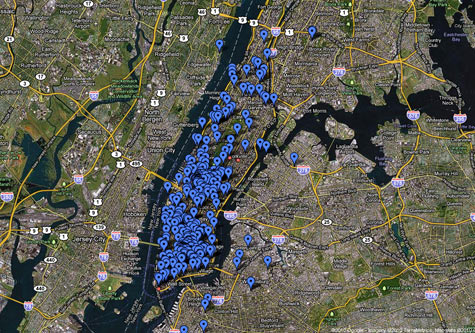 In a quite brilliant move, the ICP archives have created a Google map not only of all the locations where Weegee took photographs but including a clip from the newspaper. There is tons of other interesting stuff at ICP's 'Weegee's World' including photos, audio and a searchable database, but this is genius.

"Firemen William Murawski and William Miller went to the rescue of this cat when it wedged itself between the walls of the buildings at 51 and 53 Barclay St.
PM Daily, Oct. 6, 1942, p. 19" 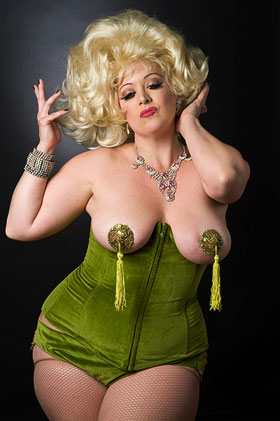 As a reaction to Guiliani whitewashing Times Square and cleaning up NYC nightlife, Neo-Burlesque emerged as a force. My client Leland Bobbé has been photographing the performers and is working on a book about them.
Leland knows how to capture a personality in a single frame and this skill works so well with his burlesque photographs. There are other photographers working on burlesque projects, but personally, I find Leland's work more tasteful, engaging and empowering than either Henry Horenstein (may I never see that fishnetted backside close-up ever again), and Miami Celebrity Photographer Brian Smith.
Dirty Martini © Leland Bobbé 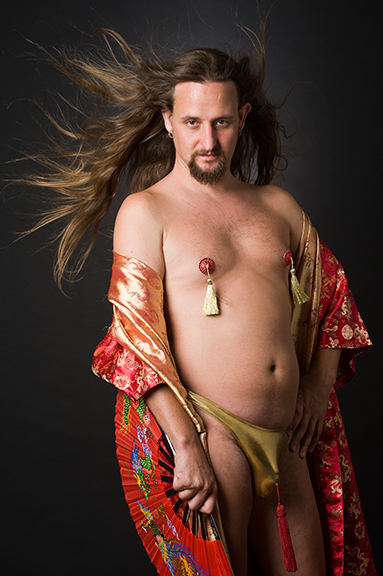 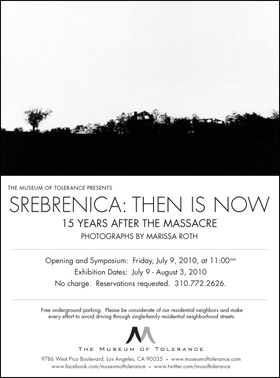