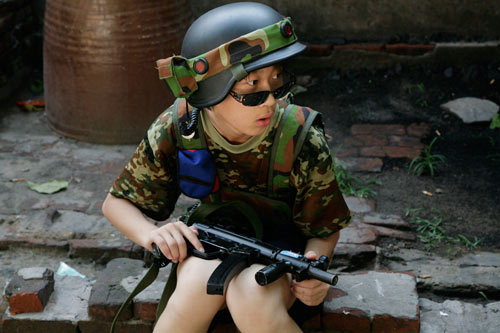 Towards the end of 2011 I reviewed the portfolio of a photographer* who suggested I might like the work and personality of a young woman who had assisted him, and I was happy to be formally introduced to Jennifer Osborne. I had heard Jen speak about her work in the summer of 2010 at Aperture as part of the program around the publication of the book 'reGeneration: tomorrow's photographers today'; I was moved by her series 'Tough Blood' about the mentally ill, suicide-prone residents of Vancouver's Downtown Eastside. However, I chose this project, Net Generation, which she photographed in July 2009, to kick off the new year.

It has been suggested that in China more than 10% of the country's 100 million teenage web surfers fall prey to excessive gaming and online activity. Jennifer Osborne visited Doctor Tao Ran's recovery program for Internet addicts, established in 2004. The young people Jen photographed are in summer video game rehab at the Beijing Region Military Hospital.

The series was originally produced with the support of COLORS Magazine.

This is a great idea: you chose a photo, buy a print and get to decide which of the signed-up charities your money goes to. Charity gets 50%, photographer gets 25%, The Nuru Project runs the business off the 25% they keep. There's a "back story" accompanying each photograph, which you receive in print if you buy, so you can connect a little with the photographer or at least hear her thoughts (I trust they will be adding more women in the coming year.)

Prints start at $50 and you have time to browse and order before the holidays.

Do the right thing this year: support a charity, and shop at your local small businesses. 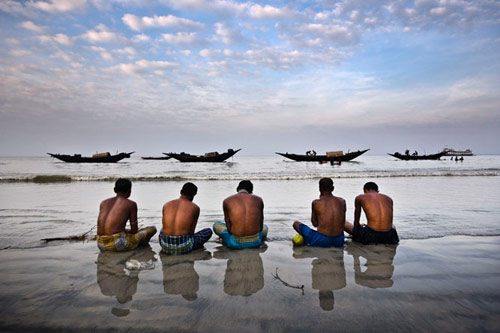 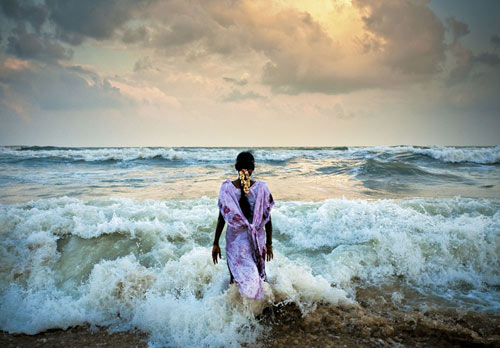 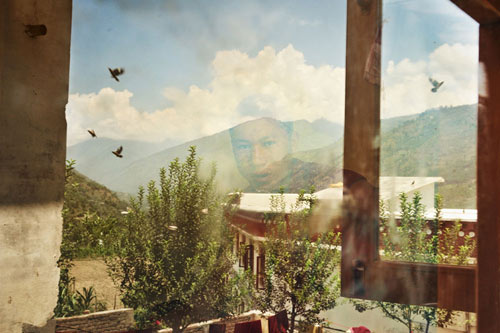 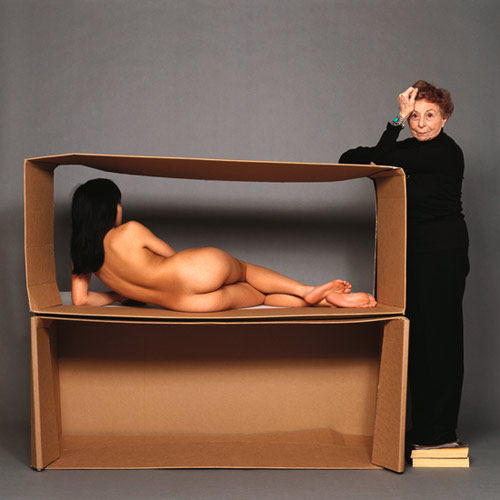 Abe Frajndlich gave me free reign to put together a second series from his stunning new book, 'Penelope's Hungry Eyes' which is packed with over 100 portraits of the master photographers. If your favourites are not here in my edit I'm sure you'll find them in the book.

"With a single-mindedness and tenacity which can only be compared to Penelope's faith in the return of her husband Odysseus, Abe's "hungry eyes" pursued the goal of photographing photographers for generations. In the course of over thirty years he compiled an ever-growing portrait collection of famous colleagues, 101 of which now appear in his new book."

On December 7th, 2011, the New York Public Library will be host to a discussion between Frajndlich; Henry Adams, author of the introductory text; and Duane Michals, one of the  photographers featured in the book.

Get a copy of the book. 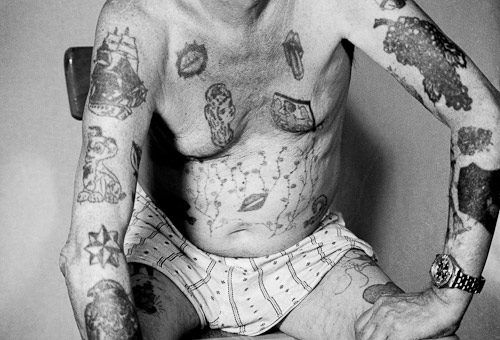 aCurator contributor Klaus Pichler will be signing copies of his new book, 'Fürs Leben gezeichnet' this Wednesday, December 7th 2011 at 7:30 pm at galerie OPEN, Legiendamm 18-20, 10179 Berlin. As well as some great portraits and detail photos, 'Scarred For Life' includes interviews with prisoners about their tats. 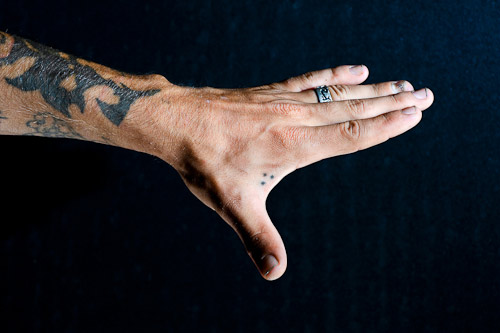 "There was no way of stopping people having tattoos done in prison, not even back in the 70's when we weren't allowed ink and needles weren't available. We just made all the stuff ourselves. The colour was made by cutting a piece off the rubber sole of our prison shoes, burning it and covering it with a tin bowl which created a layer of soot on top. We mixed the soot with toothpaste or shampoo. The red colour was made using brick dust which we scraped off the prison walls. Our needles were usually sharpened paper clips, pieces of wire or guitar strings." Mr. J., 57 years 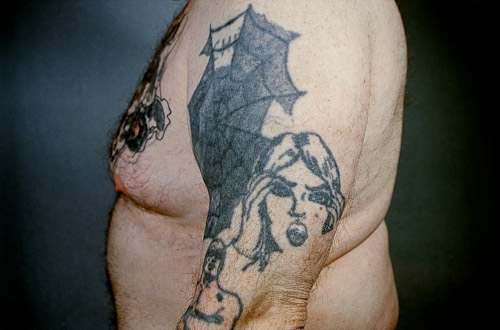 "Traditionally tattooing used to be mainly for people from the prison scene, nowadays it is trendy everywhere. I'd say if you compare modern day tattooing to the old tradition, many people just feel very important nowadays. It never just used to be a tradition, you know, but it was also a sign of being part of a criminal culture. Everybody who got put away for a while just had to have some done. Well, you didn't exactly have to, if you didn't want to do it you didn't do it, but nearly everyone had some done. Criminals were criminals and they were tattooed. That was it. We were outsiders and with our tattoos we made a promise not to join the mainstream." Mr. L., 63 years 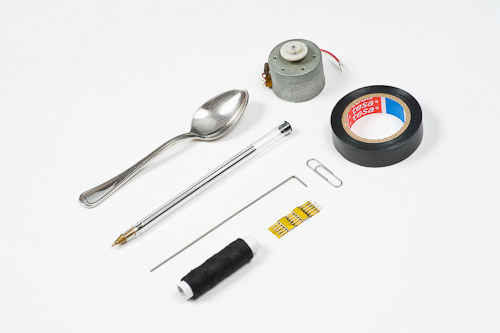 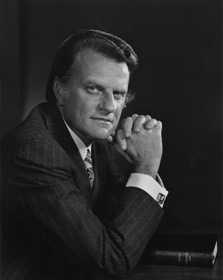 Contrary to a news report by Charlotte, North Carolina's WBTV this weekend, Billy Graham is not dead. The 93 year-old reverend is hospitalized with pneumonia. According to Wikipedia, including Obama, Billy Graham has now personally met with twelve US presidents, the same number that Mr Karsh photographed during his career.

Looking through a Google image search on the rev, you can't deny he's always had pretty amazing hair. 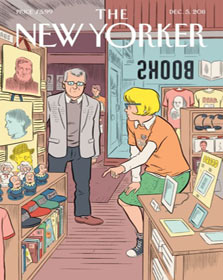 The cover of the December 5th, 2011 issue of The New Yorker features a bookstore selling more merchandise than books. Notice on the left a row of handbags, one of which is the Yousuf Karsh portrait of Ernest Hemingway. Much purloined over the years, he's been discovered on bottles of rum, T shirts, restaurant menus, and even iPad apps. Long live Ernest Hemingway. 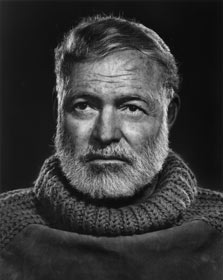 "I expected to meet in the author a composite of the heroes of his novels. Instead, in 1957, at his home Finca Vigía, near Havana, I found a man of peculiar gentleness, the shyest man I ever photographed - a man cruelly battered by life, but seemingly invincible. He was still suffering from the effects of a plane accident that occurred during his fourth safari to Africa. I had gone the evening before to La Floridita, Hemingway's favorite bar, to do my "homework" and sample his favorite concoction, the daiquiri. But one can be overprepared! When, at nine the next morning, Hemingway called from the kitchen, "What will you have to drink?" my reply was, I thought, letter-perfect: "Daiquiri, sir." "Good God, Karsh," Hemingway remonstrated, "at this hour of the day!""
Karsh | Permalink |
Share

Superb photographer Don Whitebread sent in a series of photographs he took in Yemen last year. When you're done here, head to his website. I am loving his Star Tracks series (one of which just won a Silver Award in the Black and White Magazine Single Image Issue.)


** Update: Exhibition opens at World Affairs Council where Don will be speaking on April 5th, 2012 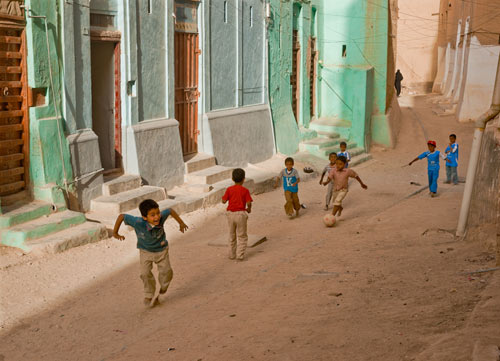 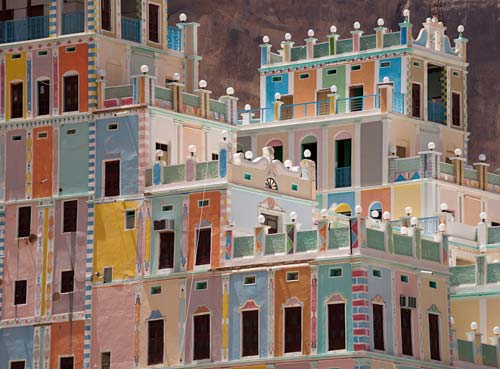 "In 2010, before the current protests, I was able to photograph throughout the surprisingly diverse and traditional country of Yemen with the help of a friend who lived there. Sana'a, Yemen's capital, is the oldest continuously inhabited city in the world.

Despite some serious research, Yemen was unlike anything I imagined. The landscape that I came to photograph was much more visually diverse, and historically richer than I expected. The people and culture of Yemen are firmly but comfortably locked in centuries-old traditions. I found the Yemeni people to be hospitable, confident, and apparently unenvious of the lifestyle much of the rest of the world embraces.

I have chosen to include both color and black and white photography in this series. The natural and urban landscapes of Yemen lent themselves easily to my usual style of black and white work. This was the photography I had in mind when I went to Yemen. The precarious cliff-top towns of the Yemeni highlands are surrounded by hypnotic patterns of terraced farmland. The strangely shaped Dragon's Blood Trees, and the cliffs and dunes of Socotra Island rival anything photographed in the parks of America. After a few days in the cities and villages of Yemen, it was clear to me that the images capturing the lives of the Yemeni people had to be in color. We are familiar with the vintage appearance that attempts to enhance much photography of the Middle East, but the lifestyle of Yemen needs no enhancement."

Images from the series have been exhibited and published, and two are currently nominated for an international Photography Masters Cup award. Don is now working on a book with writing by his friend who lived in Sana'a, before he was arrested and deported during the height of the protests. 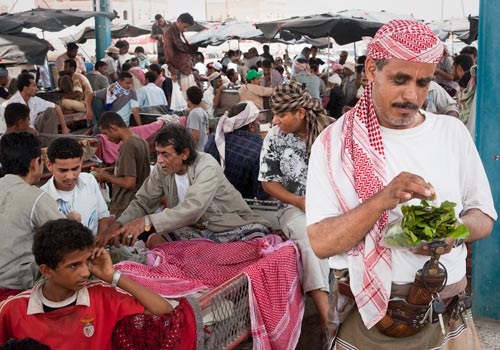 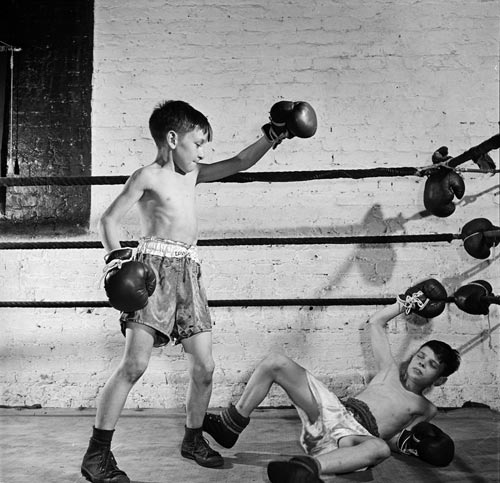 Police Athletic League Boxing
The fortunate folk at VandM have partnered with the Museum of the City of New York on exclusive, editioned prints selected from Stanley Kubrick's wonderful negatives archive. Shooting for Look Magazine from 1945 - 1950, when he left to pursue film-making, Kubrick produced a bunch of stellar stills.
Available to the public for the first time, at $250 for an 11x14, you might be able to treat yourself.
The majority of the proceeds go to the Museum.
All photographs by Stanley Kubrick, courtesy of VandM, where you'll find lots more info.
View the special full-screen feature.
Magazine, News, Photographers | Permalink |
Share 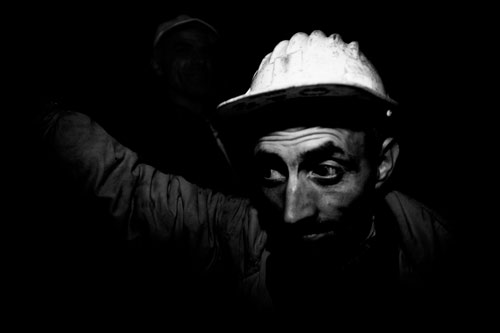 Born in Germany and based in Stockholm, photographer Ole Elfenkämper has produced a couple of documentary series in Albania recently: one covers environmental concerns, and the other, which I'm happy we could put together into a feature here, is about a strike by chrome miners that lasted three months and is the longest industrial action since the fall of communism.

Bulqiza is a town in eastern Albania and is one of the richest areas in chrome in the Balkans. On July 4th its chrome miners downed their tools to protest for better working conditions, a wage increase, and changes to the administration of the mine for the sake of its future.

The miners started their protest in Bulqiza but after 16 days of general strikes and protests they went to the capital, Tirana, where they camped in a park nearby and went each day for five days to protest in front of Prime Minister Sali Berisha's office. With no hearings by the government forthcoming they decided to return to Bulqiza, and a group of 15 miners went 1400 meters underground to begin a hunger strike.

On October 8th, after three months of strike and long negotiations, the miners went back to work having agreed a deal with the management which included a wage increase. Just twelve days later, 1600m underground a massive explosion took place and one miner died and two out of seven wounded were fighting for their lives.

After the incident, the Union for Inspection and Rescue of Mines closed the mine until the company fulfills the security requirements for the 'galleries.' With the mine closed and the owners having not paid the workers during the months of the strike, the lives of the miners have become more and more difficult. They are forced to risk their lives working in other, sometimes abandoned, mines. As a result of working in unsafe conditions another deadly accident took place on November 11th in the chrome mining area in Bulqiza, bringing the total to 15 deaths in the last three years. Prosecutors are still investigating. 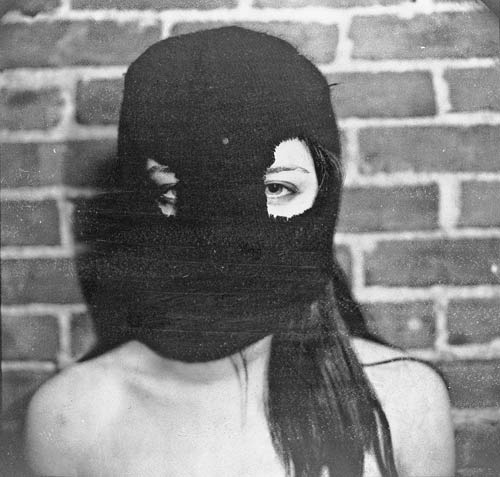 Here's another young, raw photographer whose work and attitude I find exciting: Harry Gould Harvey VI is a self-taught 19 year-old high school dropout based in Newport, Rhode Island. We've been emailing for a few months, talking about punk music, wealth disparity, Occupy Wall Street and discontent in general. In between first contact and the publication of this feature, HGH has been on the road with his own hardcore band, Convulsions. I really appreciate the value that this young artist put on connecting with me, saying how hard it is to otherwise access "the world of contemporary photography." This is part of an ongoing series, a sarcastic, social commentary that is meant to be alarming and disconcerting, to convey a sense of anger, and is shot in and around the mansions of Newport.

Also worth a look: HGHIV and his partner run The Amerikants, a project that "has been created to showcase the artwork of people who are involved in the hardcore/punk/metal scenes around the world. The ideas and art that will create this site are all based around the DIY ideal, and it is an opportunity to expose work with peers having similar interests."